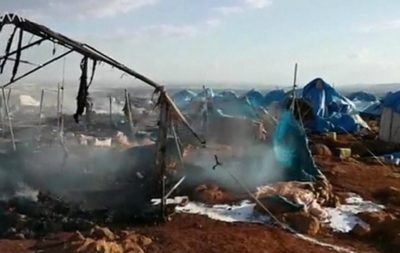 On Thursday, May 5th 2016, an airstrike hit a refugee camp in Idlib, southern Syria – a camp close to the Syrian-Turkish border.

The airstrike has killed at least 28, and is said to have injured over 80. It is not yet clear who is responsible. Most believe the airstrike was carried out by either the Syrian or Russian state, but the Russian Ministry of Defence claims it could have been carried out by Al-Nusra Front militants.

If the airstrike was indeed carried out by state actors, this attack would not be the first to target highly populated areas.

This attack comes just days after the air strike on the hospital in Aleppo that killed at least 50, including many hospital staff.

In 2015, AOAV’s Explosive Violence Monitor found that airstrikes carried out by state actors in Syria killed and injured at least 4,021 civilians in populated areas alone. Of these at least 4 attacks were on hospitals.