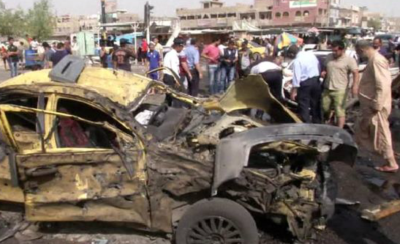 In the worst day of violence seen so far this year in Iraq, the capital, Baghdad, was struck by a series of bombings. The attacks on Tuesday, May 17th 2016, killed at least 77 and injured more than 140. Though this total is expected to increase, with many of those injured said to be in critical condition.

In the first attack, in the al Shaab district, a car bomb was detonated, followed by the detonation of a female suicide bomber. This double bombing alone killed 41 and wounded 70.

The second attack in Sadr City – a car bomb – killed a further 30 and injured 57.

In al Rasheed, just south of the capital, another car bomb killed six and injured 21.

The two initial attacks were claimed by the Sunni militant group, ISIS, and continued to target predominantly Shiite areas of the capital.

The series of violence perpetrated by ISIS over the last week across Iraq has killed over 100. The attack last Wednesday, May 11th 2016, in the Shiite district of Sadr City which killed 64 and injured 87.

Attacks on markets too are considered particularly lethal for civilian populations. AOAV Explosive Violence Monitor 2015 found that typically, 99% of those killed and injured in explosive violence in markets are civilians.