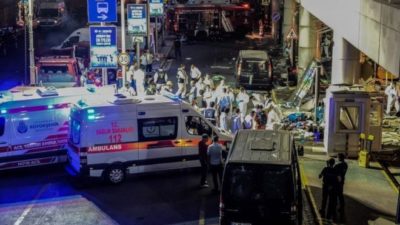 Turkey is reeling today after yet another mass-casualty suicide attack left 42 dead and around 230 injured yesterday evening (Tuesday June 28th). According to reports, three men wearing suicide belts and armed with AK-47s opened fire at the security barriers of Istanbul’s Ataturk airport before blowing themselves up. Both airport security and civilian travellers are understood to have been killed in the attack.

As yet no organisation has issued a claim of responsibility, although suspicion is bound to fall on ISIS militants after their call for attacks during the holy month of Ramadan. ISIS have previously launched other suicide attacks targeting civilian areas in Turkey, particularly since early 2015.

Recorded levels of explosive violence in Turkey have experienced a precip
itous rise over the last year and a half thanks to both an escalation of ISIS activities on Turkish soil and a rapid escalation in the conflict between various Kurdish nationalist groups and the Turkish state. In 2015, AOAV’s EVMP (Explosive Violence Monitoring Project) recorded more than seven times as many incidents of explosive weapon use in Turkey than in 2014. A particularly bloody part of this escalation has been the use of suicide bombings – AOAV has recorded 971 civilian deaths and injuries as a result of 10 suicide bombings in Turkey since the beginning of 2015, including a horrific 602 from the October 2015 bombing of a peace rally in Ankara.

AOAV calls on all participants in all conflicts to end the use of explosive weapons against civilians and in areas likely to contain high concentrations of civilian life. We also call on the Turkish state and other governments in the region to work together to put in place measures for the control of precursor materials to degrade organisations’ ability to manufacture suicide vests and IEDs of the kind used in this attack. Mass-casualty attacks on civilians must stop.