On 24 January 2015 the morning sky over the Vostochniy district of Eastern Mariupol, Ukraine was calm. It was cloudy and dry and you could see for miles across the stubble fields and grey apartment blocks that mark the flat lands of the region. 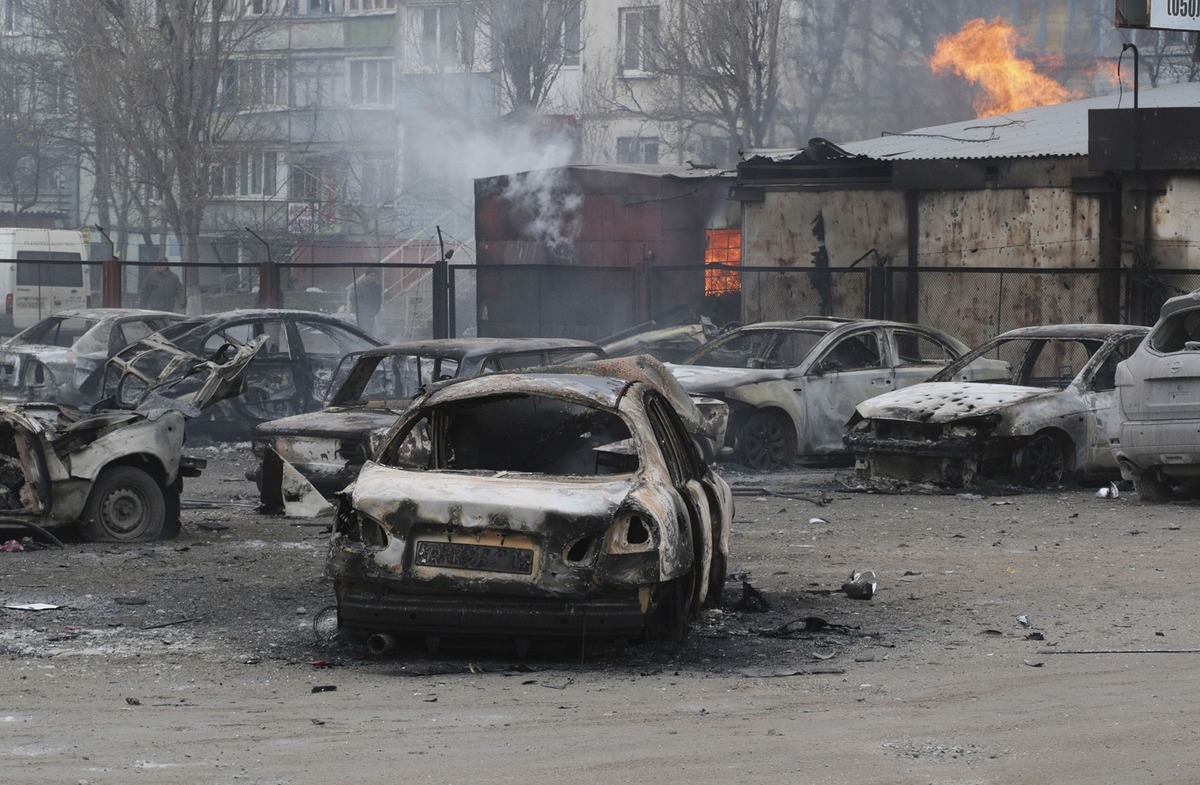 That calm was soon broken. At 9.15am, a barrage of Grad rockets hit the sleepy streets of this Ukrainian suburb. At least 30 people were killed in the blasts, including two children aged five and 15. One military serviceman was also killed.

AOAV recorded at least 97 further injuries reported at the time of the attack, but the true figure of injuries may be far higher. For many of the 30,000 residents living in the district at the time their lives changed in that terrible instant.

The strike – a salvo of up to 100 separate rockets – lasted between 30 seconds and two minutes, according to victims and witnesses interviewed by AOAV. The rockets fell across a wide area, striking schools, markets, shops and public housing.

Three strikes hit kindergarten No.160; five hit school No.5; and two were hit the territory of school No.57.

Other rockets landed among the Kyivskiy and Denis markets, a number of shops and a pharmacy. In total over fifty apartment buildings and about 100 private homes were damaged or destroyed. Ten fires were recorded following the barrage, gutting shops and homes, and twenty cars were also reported destroyed.

The possible target – if indeed there was one – was a checkpoint manned by the Ukrainian government forces on the road to Novoazovsk. But this military target, at the crossroads of Taganrogska and Marshala Zhukova, lay over 400 metres from the closest residential building (73 Kyivska Street). To put this in perspective, the only known military checkpoint in the area lay 830 metres from the site of the nearest recorded Grad strike and some 1900 meters from the furthest. The radius of the area hit by the strike was 817 metres across and 1380 metres wide.

The direction from which the Grad rockets were launched has been the centre of much debate. 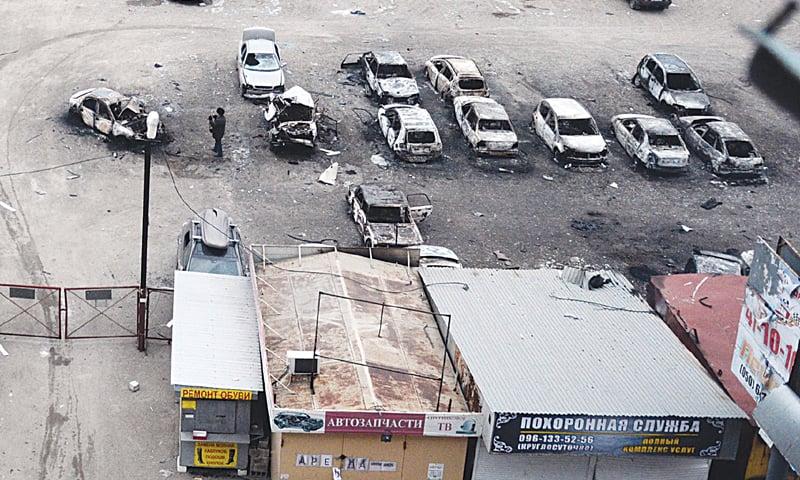 The Organization for Security and Co-operation in Europe’s (OSCE’s) initial evaluation suggested that the rockets originated from a north-easterly direction, from areas controlled by the self-proclaimed Donetsk People’s Republic (DPR).58 This assessment has since been widely accepted and AOAV’s analysis at the site in August 2015 did not contradict the OSCE view.

According to one of the leading Accident and Emergency doctors in the city, ambulances and other emergency units were to arrive at the shelling locations within thirty minutes of the strike. Most of those injured were admitted to hospital between by 12.00am – about two hours after the rockets struck.

The cumulative reports from these responders that AOAV spoke to repeatedly confirmed the fact that the weapon involved was the Grad. No traces of other weapon types were found. AOAV’s investigation in Mariupol into the fallout from the 24 January attack illustrates in detail the devastating impact of the use of the Grad rocket in a populated area.

When looking at the issue of multiple launch rockets a narrow analysis of a single explosive detonation is not as helpful as in other analyses of individual cases of explosive weapon harm. A look at the whole of the area affected is, when it comes to Grad strikes, arguably of greater utility. Such an overview demonstrates the wide area impact of a multiple delivery system. It shows how the area affected by the system as a whole is magnified as each rocket’s own individual lethal area overlaps with others to create a situation where there is nowhere to hide under a barrage.

However, a closer analysis of the human impact of a single Grad rocket is important, as it helps to build understanding of how such an impact, when multiplied twenty or forty fold, can cause cataclysm in a matter of minutes.

To this end, AOAV focused on a Grad rocket that landed at the entrance of the Kyivskiy market in Mariupol. Although just one of a number of strikes that hit the market, it was to cause the most damage. It killed two people, including a woman who ran a stall selling sausages, and injured several others. The rocket demolished the Grazi sausage stall – part of a small chain of cooked meat stands – that stood at the entrance to the market.59 It sent fragments flying dozens of metres away, penetrating walls and cars.

It has been estimated that the radial area impacted by one single Grad rocket is 1,046 square metres. In this case study, a survey of the area of impact supports this. Fragmentation was found over 120 metres to the south of the blast – penetrating the outer walls of a pharmacy – and 50 metres to the north – piercing metal stalls where traders had been selling oil. The blast radius was only contained by the large selection of metal-fronted shops that proliferated around the edge of the market.

A more detailed analysis of the strike illustrates the primary, secondary and tertiary impacts of the Grad rocket. The primary explosive weapon effects from a Grad rocket launcher are those that are caused “directly by the destructive effects that radiate from a point of initiation and include blast and back over-pressure, fragmentation, heat and light.”

Fragments from the Grad’s warhead have an initial velocity greater than 1,500 metres per second. While the specific injuries from the strike on the Grazi stand could not be catalogued, an AOAV interview with one of Mariupol’s leading trauma doctors confirmed that many victims from the strike suffered significant respiratory, auditory and internal damage. The sausage stall owner died immediately. A nurse who was purchasing food from her died shortly after. Her final moments were captured on video, and showed her bleeding profusely from shrapnel wounds.

The fragmentation that was thrown up and sideways from the blast was blasted outwards at a raised height. The upward spray of metal shards was clearly visible in the puncture marks of various metal shipping containers that surrounded the stall – all above knee height and most at about 1 to 2 metres from the ground.

The secondary explosive weapon effects of the Grad strike were its impact on the surrounding man-made and natural environments. The nature of the secondary explosive weapon effects is governed by the precise impact location. If the weapon impacts onto a hard brittle surface, such as concrete, stone or brick, the detonation of the rocket’s high-explosive warhead will cause parts of the surface to break off and become as deadly as the original warhead steel.

In this case, the rocket caused glass and brick to be sprayed in all directions; a local shoe trader was hit by concrete fragments that remained embedded in her skin months after the strike. Her son was harmed by flying glass. Other traders talked of significant cuts from flying concrete and glass.

The fire that engulfed the sausage stall was also a secondary effect – likely to have been from the burn-off of the remaining fuel in the Grad rocket.

This report does not seek to address the tertiary effects of the Grad’s use, for example the reverberating, indirect and/or longer-term damage caused. Nonetheless, the market traders interviewed nearby spoke of a marked down-turn in profits. They had to contend with destroyed stock, a drop in clientele and a permanent sense of unease; the fear that the Grads would return. This sense of unease was something that all the case studies shared. The fear that the use of explosive weapons in populated areas creates can be deep and insidious. It harms minds, tears apart families and damages societies. It is a fear that is all too often neglected. Post-traumatic stress disorders often go unrecognised or untreated. And it hints to how the harm caused by explosive weapons when used in populated areas goes far beyond the moment of detonation. That is just the beginning.