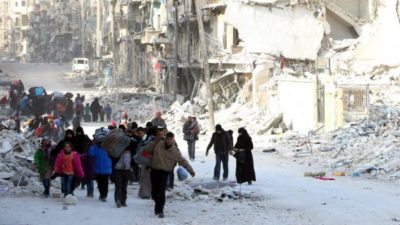 Regime shelling on the eastern neighbourhood of Aleppo in Syria on Wednesday, November 30th, killed at least 45 civilians as they were fleeing the violence.

It has been reported that most the dead were women and children, and the death toll is expected to rise.

The news comes as the Syrian regime announced taking significant areas of eastern Aleppo that had been controlled by the rebel fighters.

On Tuesday, civilians were also killed in a number of airstrikes on the beleaguered city. Anadolu Agency gave a total of 51 killed in the airstrikes, whilst many others reported at least 25 killed in the neighbourhood of Jub al-Quba in eastern Aleppo.

Eight residents in the government-held districts of Aleppo were also killed in rebel shelling on Wednesday.

On November 28th 2016, it was also reported that there was only one hospital operating in eastern Aleppo city, in which only a few doctors remain. The hospital is crowded, the equipment is badly damaged, it lacks sufficient supplies, and is still being bombed. The following day, separate reports emerged of zero functioning hospitals in Aleppo. There are also reports of food and fuel shortages across eastern areas of the city.

As the government continues its relentless air campaign alongside taking eastern rebel-held areas of the city, more and more civilians are being harmed.

Of the deaths and injuries so far this year in Syria from explosive violence, just under 50% have been caused by air-launched explosives. Many reports have included barrel bombs, bunker-busting bombs, cluster bombs and chemical-laced bombs as being behind civilian deaths.

The main perpetrators of air-launched explosive weapons have been Syria and Russia.

During this period, 87% of those Syrian civilians killed and injured in airstrikes were in populated areas. Markets, residential areas, and hospitals have been the targets of many attacks. These attacks have led not just to direct civilian death and injury but also to the destruction of the infrastructure that their existence depends upon. Deliberate targeting of such areas would constitute a war crime under international law.

The worst impacted area of Syria in 2016 is, by far, Aleppo. Of the civilian deaths and injuries recorded, almost 60% occurred in eastern Aleppo and the rest of the governorate. Before the uprising against President Bashar al-Assad in 2011, Aleppo was Syria’s main commercial and industrial centre.