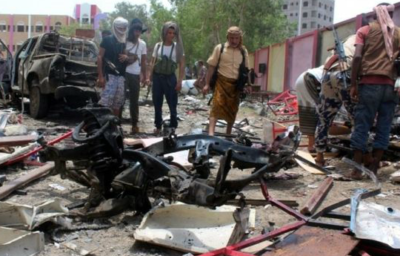 Yesterday, August 29th 2016, an ISIS militant drove a vehicle filled with explosives into a group of recruits at an army training centre in Aden, Yemen, and detonated the explosives, killing 71.

The blast also caused a roof to collapse, burying recruits beneath it.

The bomber entered the compound behind a truck that had arrived with breakfast for the conscripts. It has been reported that security at the centre is quite lax.

The attack was claimed on an ISIS propaganda outlet.

Groups such as ISIS and AQAP have taken advantage of the instability in the region to make gains of their own.

The attack in Aden adds to the deadly violence in Yemen, caused predominantly by Saudi-coalition airstrikes, followed by Houthi violence.

AOAV found that of the incidents recorded in 2015, 17 incidents of explosive violence were perpetrated by ISIS. These 17 incidents were all perpetrated by Improvised Explosive Devices (IEDs) and killed and injured 757 civilians. Of these IED attacks, at least six were suicide bombs, which were responsible for 71% of all civilian deaths and injuries from ISIS IED attacks in Yemen.