In 2007, the Government Accountability Office released a report evaluating the extent to which the DoD could ensure that US-funded equipment had reached the intended Iraqi security forces. The subsequent report determined that sporadic reporting of weapon serial numbers, failure to collect receipts of weapon storage and distribution, and confusion over which accountability rules applied to weapons issued under the train-and-equip program meant that by that point, over 190,000 weapons had failed to be accounted for. 110,000 of these were AK-47s, and 80,000 were pistols. Reports of loss and theft of weapons from Iraqi security forces emphasised the danger in not only failing to consistently report the value of arms provisions to Iraq, but subsequently failing to keep track of them. The report showed a clear need for stringent accountability standards. 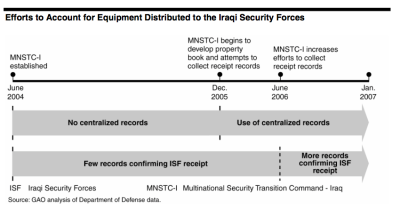