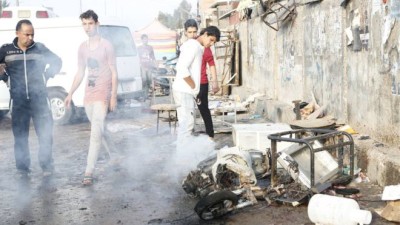 This Sunday saw fresh horrors for the people of Baghdad as two motorbike-riding suicide bombers blew themselves up in a crowded market in the city’s suburbs. Preliminary casualty numbers suggest at least 70 people died and more than a hundred were injured in the attack on Iraq’s capital, almost all of them civilians.

The attack was soon claimed by ISIS, who described it as an attack on ‘rejectionists’ (rawafid) – a derogatory term for Shi’is.

The incident was the fourth most lethal single event ever recorded by AOAV in Iraq, including attacks with conventional weaponry.

The market lies within the densely-populated, largely Shi’i neighbourhood of Sadr City, south of central Baghdad. This is not the first time Sadr City has been targeted by ISIS – in August last year, a suicide bomber killed 67 people and injured more than 150 when he detonated his truck bomb in the middle of a crowded marketplace. In 2013, a suicide bomber targeted a Shi’i funeral there, killing 72 and wounding more than 120.

The sprawling metropolitan area of Baghdad has long been a target for IED attacks of various kinds, including suicide bombings. Of 3592 incidents of explosive violence recorded by AOAV in Iraq in 2015, 180 – half – took place in Baghdad province. Of these, the majority – 139 – took place in various neighbourhoods of Baghdad city itself. AOAV recorded 3,176 civilian deaths and injuries in Baghdad province last year alone.

AOAV calls upon all groups to reject the deliberate targeting of civilians. Meanwhile, addressing the threat of suicide attacks and IEDs more generally should be an urgent priority for states everywhere. We have previously noted the devastating toll that the steadily rising number of suicide bombings is taking on human life worldwide.

Research by AOAV has also investigated and highlighted the possibilities and importance of stockpile control and regulation of potentially explosive precursor materials. States should as a matter of urgency establish better legal and practical controls over their stockpiles of military and industrial explosive and commercial products which can be repurposed as explosive.