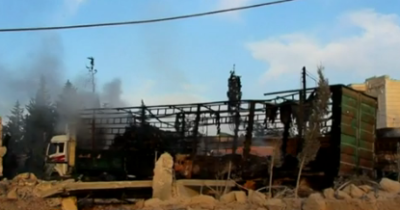 A UN aid convoy was bombed, killing at least 12, on Monday, September 19th 2016, minutes after the ceasefire was declared over by Syria. The strikes were believed to have been carried out by either Syrian or Russian warplanes, though US evidence points to Russian warplanes conducting the airstrike.

The attack occurred as the Syrian Red Crescent trucks unloaded aid, such as flour, medicines, clothes and other emergency supplies for 78,000 people in Urem al-Kubra, a town in Aleppo province.

Initial figures stated that at least 12 were killed in the attack on the aid convoy, including humanitarian workers and truck drivers. One of those killed was Omar Barakat, director of the Syrian Red Crescent. The Syrian Red Crescent said in addition to the head of one of its local offices, around 20 civilians had been killed.

Though there is speculation as to how the attack took place, the Syrian Red Crescent confirmed the aid vehicles had been struck by warplanes as bombing resumed across Aleppo.

If deliberate the attack on the humanitarian aid convoy would be a war crime. The attack has also prompted the UN to suspend all aid shipments into Syria.

The strike followed Syria’s declaration that the ceasefire was over on Monday, after the US-led coalition airstrike on Syrian army positions near Deir al-Zour, that killed at least 62 Syrian soldiers and injured more than 100.

There had been many reports of ceasefire violations throughout the week. It was reported that rebels violated the truce 302 times, leading to the deaths of 63 civilians and 153 Syrian soldiers, and the opposition reported 254 violations by government forces and their allies. The Syrian Observatory for Human Rights recorded at least 22 civilian deaths from government bombings during the ceasefire.

The strike on Monday also destroyed 18 of the 31-vehicle convoy and buildings were also damaged.

Delivering aid has consistently been dangerous during the Syrian conflict, with convoys coming under sniper fire and shelling. However, it is thought that the attack on Monday was the first time an aid convoy had been hit by an airstrike.

Other sites hit by airstrikes during the conflict have included hospitals and refugee camps.

AOAV strongly condemns the use of violence against civilians and calls upon all groups to reject the deliberate targeting of civilians. The use of weapons with wide-area impacts should also remain of concern; due to the severe impact these have on civilians. All actors must urgently address the civilian harm in Syria. The situation in Syria requires an urgent response to prevent further suffering of Syrian civilians, who have for too long borne the impact of the violence in their country. AOAV encourages states to reinstate the ceasefire so aid may safely enter and further civilian harm can be prevented.