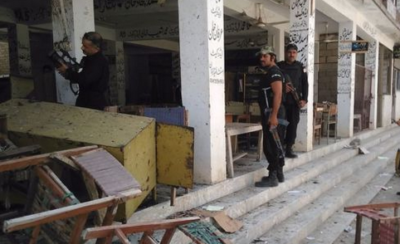 Last Friday, September 2nd 2016, a suicide bomber used a gun, grenade and explosive vest to kill 12 and injure over 50 in an attack at the district court in Mardan, in the Khyber Pakhtunkhwa Province of Pakistan.

After shooting his way through to the main gate to the court the bomber threw his hand grenade and detonated his suicide vest.

The Taliban faction, Jamaat-ul-Ahrar, claimed the bombing, as well as an attack that saw four suicide bombers target a Christian neighbourhood before being shot dead the same day.

Attacks against both religious minorities and the legal community are common in Pakistan.

Jamaat-ul-Ahrar were also responsible for the attack on lawyers in Quetta outside a hospital last month, as well as Pakistan’s most lethal bombing this year, the attack in Lahore on Easter Sunday, which ended up killing 75.

Pakistan continues to struggle with a long-term insurgency against the Pakistani Taliban and their various splinter groups. In the first half of 2016, AOAV’s Explosive Weapons Monitor has recorded 44 IED incidents throughout Pakistan which have killed or injured 691 civilians. Five of these incidents were suicide bombings, but responsible for a disproportionate 496 of the civilian deaths and injuries.

Although recent events suggest a potential worrisome return to earlier tactics, the number of civilian deaths and injuries from both IEDs and suicide bombings had been falling consistently since its peak in 2013.