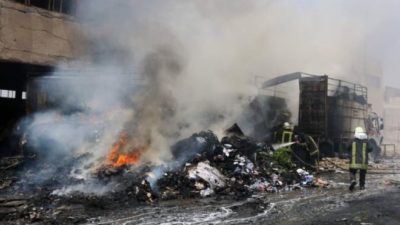 Since Friday, June 3rd 2016, explosive violence in multiple attacks by both regime and rebel forces have killed and injured over 100 across Aleppo, and the surrounding areas.

On Friday, it was reported that at least 31 civilians were killed in airstrikes by the Syrian government. The strikes hit a bus killing ten, and a further 21 were killed in strikes in the eastern part of the city.

Many reported the use of barrel bombs – oil drums packed with explosives and shrapnel. These weapons are highly inexact and pose significant danger to civilians.

On Saturday, June 5th, the Russian Center for Reconciliation in Syria stated that 270 civilians were killed and hundreds more were injured by militant bombing across Syria, with 40 reported to have been killed and a hundred injured in the militant shelling on Aleppo.

Both rebel and regime use of explosive violence continued on Sunday, June 6th, including more barrel bombs and mortar attacks. Regime airstrikes killed at least 32 in Aleppo, whilst rebel missiles targeted west Aleppo, killing at least 20.

Many reports suggested a high number of civilians being injured from the explosive violence across Aleppo and other areas of Syria, though the exact toll is not clear.

Explosive violence by rebel forces in Syria last year was responsible for at least 2,178 reported civilian deaths and injuries, with 86% of these from explosive violence in populated areas. This number almost certainly under-estimates the true figures, owing to poor English language reporting in Syria.

The violence in Syria was greatly reduced through March after the ceasefire; the total deaths and injuries in that month were at least 50% less than those recorded in either January or February.