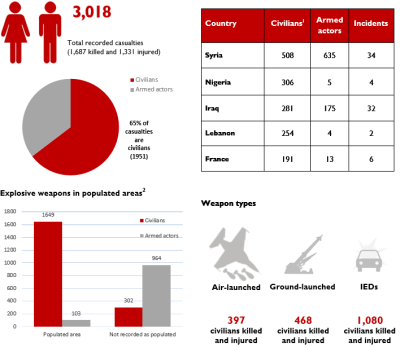 In November the single worst incident of explosive violence was a multiple suicide attack on Burj al-Barajne, Beirut.

The single worst incident of explosive violence recorded by AOAV in November 2015 was a multiple suicide bombing in the southern suburbs of Beirut, Lebanon. The suicide bombers, later claimed by ISIS, detonated a bike bomb and explosive vests near a mall in Burj al-Barajne, part of the sprawling area known as Dahiye, just as worshippers were heading home from evening prayers. Altogether the attacks killed at least 43 people and injured more than 200. ISIS’ rationale for the bombings was that they represented a strike against the Lebanese political movement, who have sent large numbers of fighters to support the neighbouring Syrian regime. This makes the attack another bloody example of Syrian spill-over into neighbouring countries. Almost of the incidents recorded by AOAV in Lebanon in 2015 – which accounted, all together, for at least 328 civilian deaths and injuries – had similar links to the ongoing events in Syria.

Non-state actor attacks on the UN Mission in Mali[3]

On 24 November 2015, a civilian staff member of the United Nations Multidimensional Integrated Stabilization Mission in Mali (MINUSMA) was killed when the MINUSMA supply convoy hit an explosive device between the cities of Goundam and Timbuktu in Northern Mali. On 28 November, a mortar attack on the MINUSMA base in the town of Kidal, Northern Mali, killed three people inside the UN based and injured 20. The UN reacted by stating that these ‘attacks will not impede the determination of the United Nations’ and that ‘MINUSMA continues to strengthen measures against such threats.’

According to critical observers, UN security measures implemented to strengthen the UN resilience against attacks by non-state actors effect perceptions of the UN as a neutral and impartial actor. The UN has pursued a strategy of securing buildings since the Bagdad bombing in 2003. These measures are usually enhanced after each non-state actor attack. Critical observers describe these security measures as ‘bunkerisation’ and criticise that it forces UN staff to observe local realities through the window of circumscribed security measures. Where this is the case, the reverberating effects of non-state actors’ targeted explosive weapons use against the UN include triggering self-protecting measures that contribute to limiting the humanitarian space.

[3] For more on this story, see: http://minusma.unmissions.org/en/attack-against-minusma-morning-kidal-0