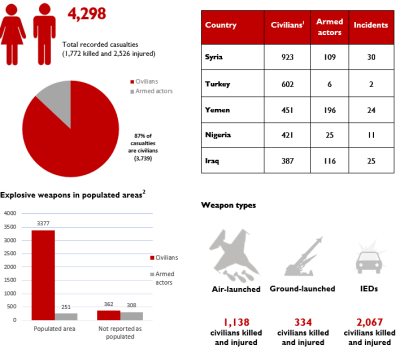 In October the single most lethal incident of explosive violence worldwide was ISIS’ bombing of a Russian plane which then crashed in Egypt’s Sinai.

The single worst incident of explosive violence recorded by AOAV in October 2015 was the detonation of an IED aboard a Russian airliner in flight above Egypt’s crisis-rocked Sinai Peninsula. The explosion and the resulting crash resulted in the deaths of all 224 passengers and crew. Initially, authorities – and particularly the Russians – were unwilling to accept the theory that the crash had been caused by a bomb.

However, later investigations demonstrated that the most probable culprit in the downing of the plane was a 1kg improvised explosive device. The attack was later claimed by members of Egypt’s Sinai insurgency, previously known as Ansar Bayt al-Maqdis (Jerusalem Partisans), who recently swore allegiance to ISIS under the name Wilayat Sinaa (Sinai Province). A picture purporting to show the device used later appeared in ISIS’ magazine, Dabiq, showing a soda can and detonator mechanism. The incident triggered considerable international scrutiny into Egyptian airport security procedures, which were shown to be very easy to bypass – corroborating ISIS’ claim that it had found a way to ‘compromise’ airport security.

During the month of October 2015, two MSF hospitals in Afghanistan and Yemen and at least five health facilities in Syria were hit by air strikes.

These events killed at least 55 people, among them patients, their relatives and 14 medical staff. The incidents also reduced the access to critical healthcare services for the period that the health facilities remained closed. In addition, the events risk further knock-on effects beyond the directly affected countries and the immediate present. The available information suggests that the health facilities were hit by targeted air strikes rather than collateral damaged from a nearby impact. This context affects the international community’s risk assessment for health care services during period of air delivered explosive weapons in present and future conflicts.

Humanitarian actors are particular concerned because it does not appear that insufficient communication between the healthcare providers and the conflict parities was at the origin of the decision to strike the health facilities. MSF stated that it informed all warring parties of the locations of its two hospital complexes. In Yemen, the roof of the hospital building in rebel-held Haydan District, Saada Province, Northern Yemen was clearly marked with its painted name and logo when it was hit on 26 October by Saudi-led military coalition air strikes. In Kunduz Afghanistan, the attack on 3 October continued for 30 minutes after they had contacted US officials informing them that they were under attack.

Humanitarian health care services are in jeopardy when users of air delivered explosives cannot be trusted to respect IHL and fail to take the necessary precautions not to target neutral and impartial healthcare providers. Once communication mechanisms have been exhausted, humanitarian agency’s natural response will be to reduce their presence. It is likely that the reverberating effects of explosive weapons use against hospitals will be felt in future conflicts. Their impact will extend beyond the boundaries of the countries where the bombs were dropped this month. It is likely that many people will be deprived of access to critical healthcare in areas under aerial bombardment because healthcare service providers will refrain from offering services.

[3] For more on this story, see Insecurity Insight’s brief at
www.insecurityinsight.org/aidindanger/wp-content/uploads/2015/11/The_Aid_Security_Monthly_News_Brief_October_2015.pdf