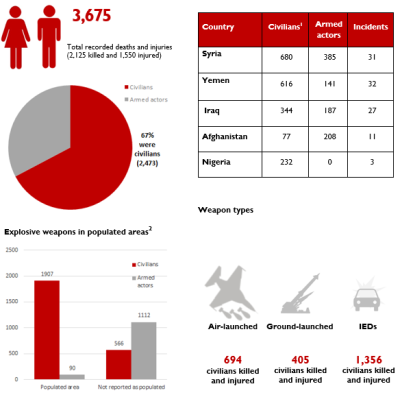 In September Syria continued to be the worst-hit country world-wide, but the single most lethal incident recorded was a market bombing in Cameroon.

The single worst incident of explosive violence recorded by AOAV in September 2015 was a double suicide bombing in Kerawa, Cameroon, which killed and injured at least 164 people. The vast majority of these were civilians. Two female bombers detonated their suicide belts outside a military base and inside a busy local market, continuing a trend of marketplace massacres.

The Kerawa bombing was only the fourth suicide bombing to be recorded in Cameroon, and as of January 2016 remains by far the most lethal to have hit the west African country. Since the first suicide attack in July 2015, AOAV has recorded 11 similar suicide bombings in Cameroon, killing and injuring at least 477 people, 453 of whom were civilians.

Although no group claimed responsibility, the bombing bore all the hallmarks of Boko Haram, an insurgent group operating across national borders in the Lake Chad region. Previously Boko Haram’s attacks had largely been confined to Nigeria, but in the wake of a string of conventional military defeats at the hands of a local coalition, the group has increasingly adopted suicide bombings against civilian populations, often making use of women and children.

On the 11 September 2015, at 10.30 local time, an improvised explosive device (IED) detonated in a tent in Nigeria’s largest IDP camp, Maikohi, near Yola in the State of Adamawa. The previous evening, 315 new people fleeing from Boko Haram terror had arrived at the camp. According to the State Emergency Management Agency (ADSEMA), the blast killed five and injured 20 people. Among the injured were camp workers and student volunteers. While the death toll was a small addition to the thousands recorded as killed by Boko Haram, the bomb affected the perception of aid agencies and volunteers.

The fact that suspected Boko Haram militants were able to plant a bomb despite the high security at the camp, where armed soldiers manned the gates and carried out checks on vehicles and passengers, is highly concerning to those with responsibilities for the safety of aid workers and volunteers. Most are reluctant to expose those under their care to unpredictable security risks. In response to the bomb, the ICRC decided to suspend all its activities in government run IDP camps. Organizers of student volunteers will reconsider sending those under their care into the camp. This illustrates how the detonation of explosives in what should be a safety zone has consequences for civilians fleeing violence that go far beyond immediate death and destruction.