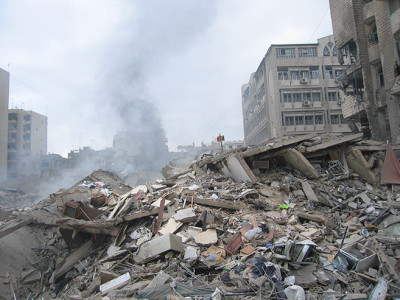 Explosive Weapons and the Protection of Civilians – there has never been a greater need for action.

In recent years, the use of explosive weapons in populated areas has been a key cause of harm to civilians and one that requires urgent international attention. Over 32,000 civilians were reported killed or injured in 2014 by explosive weapons, according to Action on Armed Violence (AOAV), a founding member of the International Network on Explosive Weapons (INEW), a number that has been increasing year on year for the last four years.

AOAV also found that where explosive weapons were used in populated areas, 92% of the casualties were civilian. The bombardment of towns and cities has continued to cause widespread civilian casualties, displacement, and destruction of infrastructure. Conflict in Ukraine, Syria, Iraq, Yemen and elsewhere also provide clear illustrations of the persistent pattern of harm.

Reflecting the urgent nature of this humanitarian problem, the UN Secretary-General and the head of the International Committee of the Red Cross last year issued an unprecedented warning, calling on states to stop the use of heavy explosive weapons in populated areas.

Against this background, discussions are now starting towards developing a political instrument to address this humanitarian problem.

At the upcoming UN Security Council’s Open Debate on the Protection of Civilians on 19 January 2016 INEW urges states to:

Current context
Over recent years, the civilian harm and widespread destruction caused by the use of explosive weapons in populated areas has attracted increasing concern within the international community, and 2015 saw the start of discussions towards a political response to this problem.

In 2011 a group of civil society organisations set up the International Network on Explosive Weapons (INEW) to respond to the impact of the bombing and bombardment of populated areas. So far around 50 countries have publicly expressed concern about this humanitarian issue, mostly in the context of the UN Security Council debates on the protection of civilians in armed conflict.

Recognition of this problem has steadily grown against the background of heavy casualties from the bombardment of populated areas in Côte d’Ivoire, Gaza, Iraq, Libya, Somalia, Sudan, Syria, Ukraine, and many other contexts. The use of explosive weapons with wide area effects such as rockets, heavy artillery, and large aircraft bombs, in populated areas, has stood out as particularly harmful in these contexts. In Syria and Iraq the use of so-called “barrel bombs” has attracted attention because of their wide-area effects. In addition, civilians have been killed and injured in towns and cities from whether other improvised explosive devices such as car bombs and “suicide” bombs have been detonated amongst crowds of people in public places.

Over the course of 2013–2015 there has been a growing international discussion on how this humanitarian harm can be prevented. At an international conference on the protection of civilians in Oslo attended by 90 countries in May 2013, the Co-Chairs’ summary recommended that the use of explosive weapons with wide area effects should be avoided. The United Nations Office for the Coordination of Humanitarian Affairs (OCHA) has co-hosted two expert meetings on this topic: the first with Chatham House in London in September 2013 and the second with Norway in Oslo in June 2014. These meetings have identified practices by armed forces that can be undertaken to reduce harm to civilians from the use of explosive weapons.

On 21-22 September the government of Austria and UN OCHA hosted a meeting for states that have recognised this problem and are interested in working together to address it. In particular Austria invited states to discuss how an international political commitment could be developed in response to the predictable pattern of humanitarian harm caused by the use of explosive weapons in populated areas. This meeting was the first step to act upon the Secretary General’s call for a political commitment, and other calls for action from states, UN agencies, the ICRC and civil society. During that meeting several states discussed ideas of potential key elements of a political declaration to address the harm to civilians from the use of explosive weapons in populated areas.

The 19 January 2016 Security Council Open Debate on Protection of Civilians in Armed Conflict presents an opportunity for states to express support for international commitment to stop the use in populated areas of explosive weapons with wide area effects and to provide stronger protection to civilians in the future.

Explosive weapons include improvised explosive devices (IEDs) as well as explosive ordnance such as mortars, rockets, artillery shells and aircraft bombs. These weapons use blast and fragmentation, and kill and injure people in the area around the point of detonation. When these weapons have been used in public places such as markets and residential areas, people that should be protected have often been severely affected, both directly, from the blast and fragment projection, and through damage to vital infrastructure such as to hospitals, housing and water and sanitation systems.