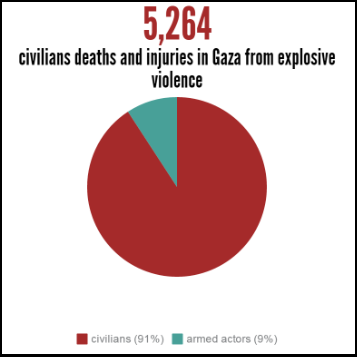 AOAV recorded 3,813 civilian deaths and injuries from explosive violence in Gaza in 2014, almost all occurring in July and August, in what is known as ‘Operation Protective Edge’.

So far in 2016 (January-September), there have been five incidents of explosive violence that have led to death or injury. These were all perpetrated by the IDF and led to the death or injury of four armed actors and at least 13 civilians, including at least three children.

At least three of the incidents targeted populated areas. Air-launched explosives were used in all incidents.

All incidences of explosive violence in 2016 have been perpetrated by the #IDF https://aoav.org.uk/explosiveviolence/gaza/

When monitoring the figures for the last five years #Gaza was the 7th most affected country from explosive violence. https://aoav.org.uk/explosiveviolence/gaza/