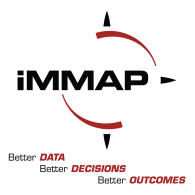 iMMAP is an international, humanitarian to humanitarian, NGO that provides targeted information management support to partners responding to complex humanitarian and development challenges around the globe. iMMAP’s philosophy that “Better data leads to better decisions, and ultimately, better outcomes,” is evident in their work, making them experts in data collection, analysis, and reporting.

iMMAP’s mission is “to empower the world’s most vulnerable through the enhanced use of data to ensure informed decision making” and their primary activities are targeted for emergency responders, development practitioners, governments, and donors/funders.

Some of iMMAP’s partners include Handicap International, the Geneva International Centre for Humanitarian Demining (GICHD), United Nations Mine Action Service (UNMAS), and the US Office of Weapons Removal and Abatement in the U.S. State Department’s Bureau of Political-Military Affairs (PM/WRA), to name a few.

In 2003, iMMAP started its operation in Iraq , where they managed and conducted a nationwide, PM/WRA-funded Landmine Impact Survey for 13 of the 18 Iraqi governorates. This initiative enabled the Government of Iraq and international partners to quantify and define the level of explosive hazard contamination on a national scale, for the first time. This provided a blueprint for the Iraqi Government and international donors to plan, prioritize, and clear the landmines, unexploded ordnance (UXO), and Explosive Remnants of War (ERW) from past conflicts, as well as residue left from coalition military operations. These explosive hazards posed a deadly direct threat to one out of every five Iraqis, as well as to a much larger fraction of the population due to the secondary effects such as the blocking of access to agriculture, infrastructure, transportation, and water resources.

iMMAP has worked to establish a common operating picture (COP) for the Humanitarian Mine Action (HMA) in Iraq since 2003. iMMAP’s work with the national mine action authorities in Baghdad and Erbil, as well as their respective partners, has resulted in establishing the national capacity to manage landmine and explosive remnants of war (ERW) mitigation activities. iMMAP provides critical nationwide HMA information management support to maintain a clear COP and help partners identify and prioritize the areas that are in the greatest need of assistance and improve coordination efforts by tracking who is doing what where.

iMMAP also manages a Joint Operations Room (JOR) through a memorandum of understanding (MoU) between the Directorate of Mine Action (DMA) in Baghdad, the Iraqi Kurdistan Mine Action Agency (IKMAA) in Erbil, and IMMAP that authorized iMMAP to set up an Information Management Centre (IMC) to manage and coordinate information management of HMA activities in the so called “Gray Area”. The Gray Area refers to areas that have been retaken from armed groups but fall under the shared HMA responsibility of IKMAA and DMA. The MoU has successfully evolved into a JOR, which provides centralized planning, operations coordination, and information management support directly to HMA organizations working in the Gray Area, and filling in information gaps to enhance and expedite the overall HMA response.

Furthermore, iMMAP has also recognized that humanitarian aid workers in Iraq operate in an unstable and unpredictable environment that lacks access to real-time event data. To help address this gap, iMMAP has developed an incident tracking and reporting tool to enhance operational performance, informed decision-making, and improved personnel safety. The incidents are shared on a weekly basis with through a publicly accessible website and an email newsletter.

iMMAP’s extensive experience and expertise in information management, both in Iraq and other countries, has led to an organic growth in the type and scope of projects managed by the organization. iMMAP’s project activities typically include one or more of the following approaches:

Lastly, iMMAP has been an official Stand-by Partner (SBP) to the United Nations (UN) since 2012, providing support to numerous UN agencies across the world. iMMAP currently maintains partnerships with UN agencies under the terms of the MoU that include: