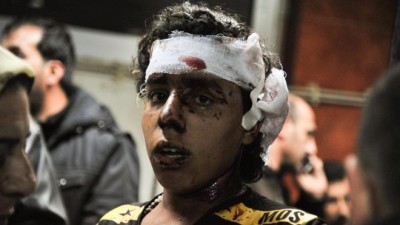 Photo of a victim of the Sayyida Zeinab attacks

This weekend – the 20 and 21 Feb, 2016 – was yet another bloody one for the people of Syria.  It saw attacks using suicide car and vest bombings, and unmanned car bombs, killing at least 140 people in Syria’s Homs and Damascus.

In Homs, a double car bombing killed nearly 60 and injured another hundred people in the largely-Alawite Zahra district.

The Damascus attack, meanwhile, targeted Sayyida Zeinab, the site of a major shrine particularly revered by Shi’i Muslims. Apparently carried out using an unmanned car bomb followed by three suicide bombings using explosive vests, it killed at least 83 people and injured another 178, according to official counts.

Both attacks had an obvious sectarian bent, and were rapidly claimed by ISIS over the Telegram app used by its operatives to avoid surveillance.

Zahra has suffered particularly intensely from similar attacks. AOAV’s Explosive Weapons Monitor has recorded five major bombings in Zahra since late 2014, when an unclaimed car bombing killed and injured around 50 people. The other four bombings – including the most recent – fell within the last three months, and collectively left as many as 548 civilians dead and injured.

Sayyida Zeinab has also been targeted before. Less than a month ago a double suicide bombing near the Damascus shrine killed 45 people and injured another 110. That was one of ISIS’ first suicide bombings in Damascus itself.

AOAV condemns the deliberate targeting of civilians, whether in marketplaces, places of worship or elsewhere. The increasing use of suicide bombs – a particularly lethal form of Improvised Explosive Device (IED) – to inflict huge civilian casualties highlights the importance of control of precursor materials, as AOAV has previously reported. As far as is practicable, states should work towards securing precursor materials which can be used to produce IEDs.