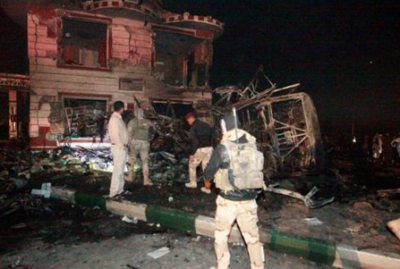 On Thursday, November 24th 2016, a suicide truck bomb targeted Shia pilgrims at a petrol station near Hilla, south of Baghdad. At least 97 were killed in the attack that was claimed by ISIS.

Many buses and other vehicles, carrying Iraqi and Iranian Shia pilgrims on their return from the Arbaeen pilgrimage in Karbala, were set alight by the bomb’s impact.

A further 20 wounded were taken to nearby hospitals. The death toll quickly increased to the 97 currently reported and it has been said that this may yet grow.

It was reported that the petrol station and the restaurant on the premises suffered significant damage from the blast.

In a statement, the Joint Operations Command in Baghdad, stated that the lorry was packed with 500 litres of ammonium nitrate, a chemical compound used often used in explosives.

So far this year, IED attacks have killed and injured over 4,000 civilians in Iraq. Those claimed by ISIS were responsible for at least 3,000 of these civilian casualties.

Last year, AOAV’s Explosive Violence Monitor 2015 found that a total of 4,850 were killed and injured by IEDs in Iraq, of which 84% were civilians. ISIS claimed responsibility for 38 of the 228 IED attacks that led to at least one death and injury recorded in Iraq last year. The 38 attacks caused over 1,500 civilian deaths and injuries. However, it is likely that ISIS perpetrated many more attacks than they claimed.

Nevertheless, the number of civilians killed and injured by ISIS IED attacks this year is already far greater than that of 2015, despite the offensives on key ISIS strongholds.

Suicide bombings, in particular, have consistently been found to the most lethal form of IED attack and are increasingly being used. It has also become a favourite for the ISIS militants due to the devastating impact they can have.

AOAV urges states and the international community to address the threat posed by IEDs, particularly suicide bombings, and implement preventative measures to limit the ability of terrorist groups to produce such weapons.

For more information on our IED research please read here.