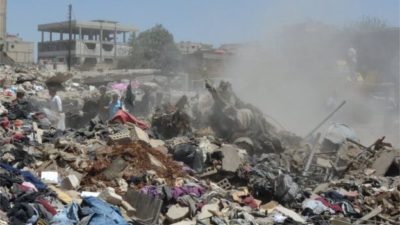 Wednesday, July 27th 2016, saw ISIS attack the Syrian border town of Qamishli. 48 were killed and more than 170 wounded, in the bloodiest attack seen in Qamishli since ISIS’s campaign began.

The truck bomb detonated near police and government buildings, causing both civilian and police casualties.

The bomb damage was amplified due to a second blast when a fuel tanker that caught fire in the initial blast exploded – this second explosion was initially mistaken as a second bomber.

Due to the extensive damage caused by the blast, many casualties may still remain beneath rubble, as work still continues to search for victims. The bombing was even reported to have caused minor injuries and shattered windows in Turkey.

ISIS have claimed the attack, stating they were targeting Kurdish military offices. The attack was the latest ISIS attack to utilise a truck bomb, which have been prevalent in their most lethal attacks, such as that seen in Iraq at the beginning of this month – in which almost 500 were killed and injured.

However, the explosive violence perpetrated in Syria by ISIS alone this year has already increased. 1,199 civilian deaths and injuries were caused by explosive violence perpetrated by ISIS in the first half of 2016. 1,167 were caused by 14 IED attacks. The attacks this year also demonstrate an increased lethality, with an average of 83 civilian deaths and injuries per incident.