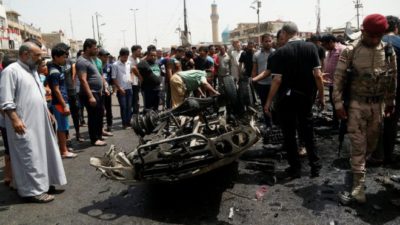 Iraq has witnessed yet another Improvised Explosive Device (IED) attack this week, bringing the total number of such attacks to 48 so far this year, causing 1,441 civilian deaths and injuries.

The attack, which took place in the morning rush hour of May 11th 2016, is said to have killed 64 and injured 87. Some of those injured are thought to be in critical condition.

The car bomb was detonated in a crowded market in the Shia district of Sadr City, northern Baghdad. ISIS quickly claimed responsibility for the bombing.

The attack follows a string of violence over the weekend and an attack on the Shiite neighbourhood of Baquba on Monday, May 9th, which killed at 16 and wounded a further 54.

Attacks on markets are considered particularly lethal for civilian populations. AOAV Explosive Violence Monitor 2015 found that typically, 99% of those killed and injured in explosive violence in markets are civilians.