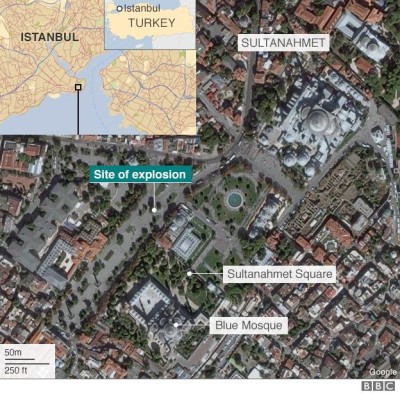 Yesterday morning (Tuesday), at around 10.20 in the morning, a suicide bomber detonated his explosive belt in central Istanbul, killing ten people. As yet, no group has claimed responsibility for the bombing, although three Russians with suspected ‘links to ISIS’ have been detained by Turkish authorities as of midday Wednesday. Although ISIS typically claim responsibility for bombings, this has not typically been the case in Turkey – perhaps as part of a tactical bid to increase tensions between Turkey and their indigenous domestic insurgency, the PKK, who are also fighting ISIS.

The bombing appears to have targeted a bus full of German tourists – of the ten confirmed dead, nine are apparently Germans. Indeed, the area targeted, Sultanahmet Square, is a popular tourist destination, and as such the strike represents not only a strike against human life, but also, deliberately or otherwise, against Turkish tourism.

Attacks on tourists are not new: only last year, sunbathers on a Tunisia beach and a Russian plane carrying holidaymakers from Sharm al-Sheikh were targeted by terror attacks. These and similar targets, as well as being an easy way to attack foreigners, have serious knock-on effects on the local economy, which can then lead to further political instability.

AOAV condemns the use of explosive weapons in populated areas and above all the deliberate use of explosive weapons against civilians. Advocacy towards ISIS seems unlikely to achieve much, but there are steps which states can take to reduce the vulnerability of their civilian populations, including carefully monitoring and restricting access to precursor materials. AOAV calls on governments to legislate and develop mechanisms to control potential IED components. Violence against civilians must stop.