At 1pm on the 9th day of Ramadan in 2015 – June 5th – a mortar hit the Al Horani coffee shop in the centre of Ramtha. The blast killed ‘Abd Al Mone’em’ Sami Horani, a 23 year old Jordanian student. Known to his brother and five sisters as Abood, the young man who had ambitions to be a civil engineer, died at the scene. His cousins, Ahmed (18), Mousa (21) and Issa (13) were also injured in the blast. Another civilian – a woman walking on the street – was reported injured in the stomach but was not identified.

The shop is located about 4.5 km from the Syrian border.

The young men had arrived at the shop on Wehde Street that day to sell ice cream, orange juice, dates and dried apricots to their customers. Abood was working there with his cousins for a small stipend. When the mortar landed it struck a pole on the roof of a block of shops opposite the cafe, its blast channelling down the road into the coffee shop, spreading fragments behind, in front and to its sides at a distance of almost 100 metres.

The young man who was killed, Abood, died from significant trauma to his chest and head. Abood’s death significantly impacted the community. Locals reported as many as 15,000 people attended his funeral. His brother, Motasem, 27, said of Abood that ‘he was an ambitious young man, he didn’t go out much, he just want to school and came back and studied really hard to become a civil engineer. Everyone who knew him said he was polite, timid and never violent. He was very independent.’

Abood’s brother, a nurse for Doctors Without Borders, was deeply affected by the impact of the death. ‘I’m in denial – I don’t believe he has left and I expect to see him wherever I go. I feel like I’m living in Syria now – not another city. First, I was helping refugees now I don’t know if I want to. I am confused – who dropped the mortar? The regime? The Free Syrian Army? Some other group? I want revenge for my brother’s death. I always think of that. The conflict has taken my brother from me.’

The blast also had a deep impact for others on the site.

Mousa Yousef Yaseen Hourani, Abood’s cousin, was thrown up into the air by the blast which fractured his hip and punctured his bladder, piercing his intestines. He walks with a limp now and does not know whether this will be a permanent affliction. The family felt that they did not at first get enough medical assistance for Mousa and that when he was discharged from the hospital after five days, they were compelled to place him on an open truck at the main roundabout in the city in protest. There, they claimed, up to 2,000 people demonstrated demanding better medical aid for Mousa. In the end the family stated that he was transported to a hospital in Amman.
Today Mousa is angry that his treatment was insufficient and he claims it has caused as much harm as good. He claims that he was given too many sedatives and is now addicted to pain medication. He finds it hard to sleep. His family also say that they were also only given psychiatric help after demonstrating at the hospital. His anger and expectations echo sentiments shared by other victims of explosive weapons in this area – that the government has done insufficient to help and that he should be either given a job by them or even – as Mousa said – asylum in another country.

Issa Yousef Yaseen Hourani, the thirteen year old, was hit in the leg. His bleeding was so profuse that, it was alleged, the hospital did not have enough blood units. Volunteers stepped forward and 35 units were obtained. He has scarring on his leg but his wounds were not life changing.

Ahmad Yousef Yassen Hourani was hit in the head by the shrapnel and in his arm. His injuries were not life threatening.

The damage to the shop was relatively superficial. A refrigeration unit was destroyed and shrapnel marks can still be seen in the shop and on the roof of the shops opposite where the weapons first landed. The shop opened for business relatively soon after the attack happened.

What was clear from the scene of the attack was that the damage from mortars is far more apparent in terms of soft tissues damage than it is in terms of structural damage. While a water container was destroyed, cars punctured by shrapnel and windows broken, the penetrating depth of mortar shrapnel meant most surrounding buildings suffered superficial damage. The same could not be said of any civilian caught in the mortar’s radius. In this way it is clear that mortar strikes are anti-personnel focused – their intention is not to damage infrastructure such as roads and buildings. Rather they are a weapon aimed at maiming and killing and as such, given their indiscriminate nature, are of deep concern when used in populated areas.

Relatives of Abood spoke – as did many affected by mortar strikes – of the issue of compensation. There was some degree of Jordanian governmental financial aid offered for Abood’s death. The government supplied water and coffee for the mourners – of which there were many. They also supplied one meal and tents, though the family complained they were of poor quality. 10,000 Jordanian Dinars was also given, though the family claimed that they rejected this as they saw it as blood money.

Overall, people are very critical not only of the Syrians behind the mortar attacks but also of their own government. They criticize the lack of an early warning system, or any proper response from the government. In short, they feel powerless. 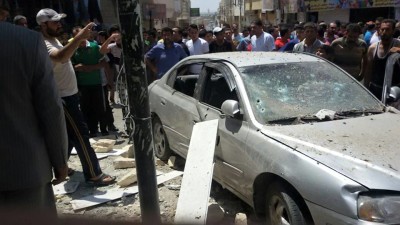 Devastation just outside the shop following the blast 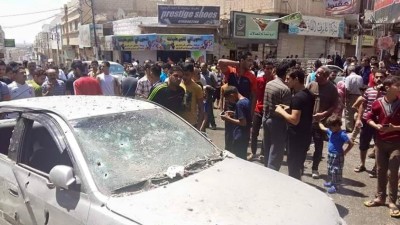 Crowds gather to witness the damage 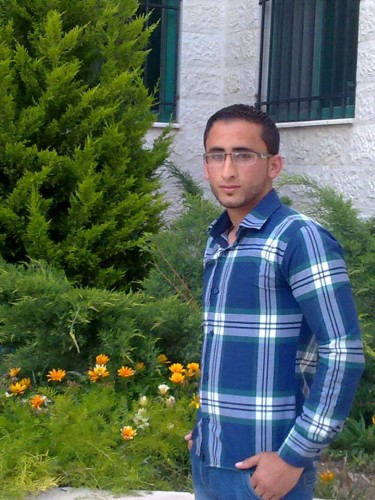 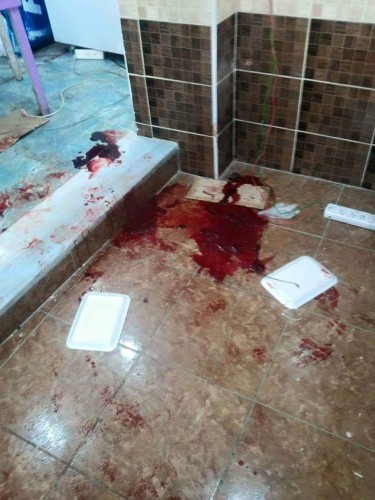 The blood on the floor remains where ‘Abd Al Mone’em’ Sami Horani was hit. 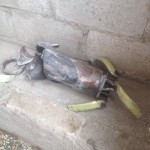 A photograph of the mortar round remnants 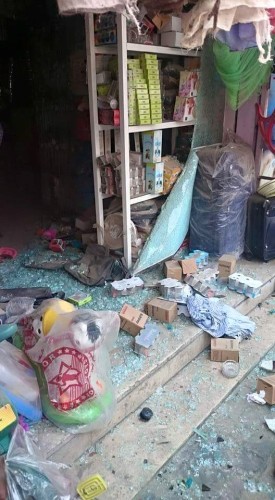 The wreckage of the shop 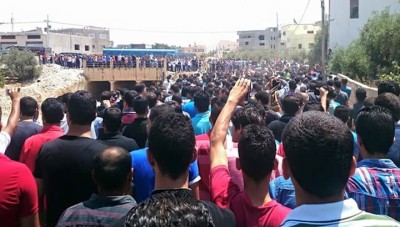 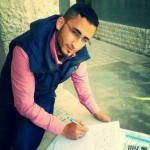 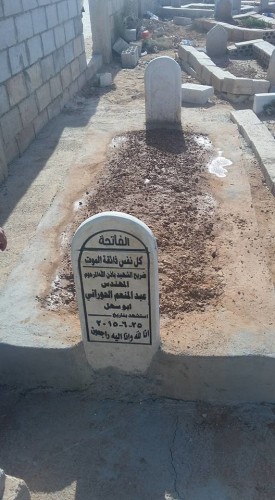 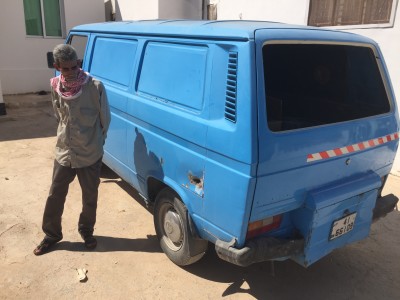 Damage to a van parked nearby 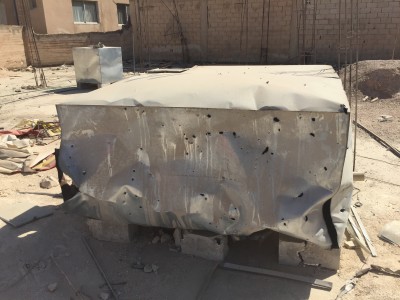 Damage to a waterbutt on a roof overlooking the shop 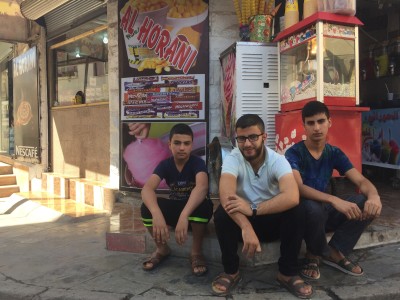 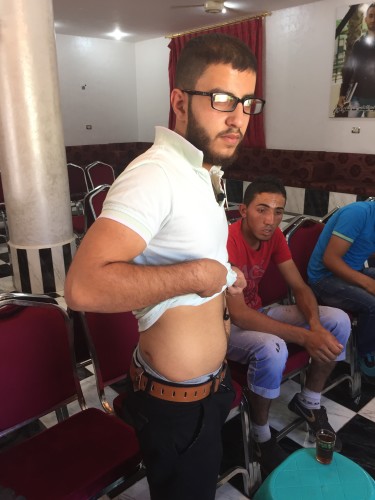 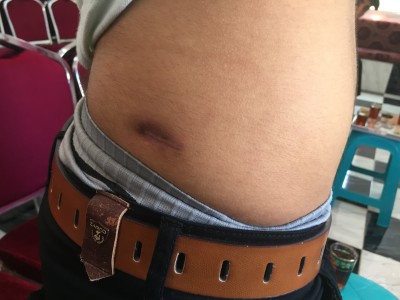 Mousa Hourani and his wound