On the 13th August at 8.00pm a mortar round hit the home of Awad Mohammed Mer’i Al Makhadme.

The 66 year old was sitting outside with his sons, Maher, Mohammed, Nejem, Bashar and Yazan. Having prepared the barley after harvest, they were sat talking, some of them on their phones, others relaxing. The mortar arrived with a sudden woosh of noise and exploded about three meters from the main doorway of their home, shattering windows and sending glass fragments flying.

All of the sons – and the father – present were injured in one way or another. The mother of the family, a woman with eight boys, rushed out and was so shocked to see what had happened that she fainted.

Her husband Awad had been hit in the chest and was later to require minor surgery and stitches to his head and to his keen to extract shrapnel.

Her son Mohammed, a 32 year old accountant, was hit in both legs and in his neck, the wounds mainly superficial.

Nejem, a 29 year old police officer, was hit in the back of his head and the forehead, but no major damage was incurred.

Yazan, a 20 year old high school student was hit on the side of his foot.

And Maher, a 24 year old accountant was hit in his left leg, right foot and in his chest, without major surgery being needed.

The worst hit, though, was Bashar, their 21 year old son, who is training to be a doctor in Ukraine. His back was extensively injured and he lost significant muscle and skin, as well as his smallest toe on this left leg and extensive damage to his Achilles heel. Over a month from the attack, he was still undergoing surgery and it was not sure if he will be able to walk properly again.

When the mortar hit, there was blood everywhere. Perhaps luckily for the family, two small, white plastic water butts were hit and this may well have absorbed some of the shock of the blast. Nonetheless the impact on their lives was sudden and profound.

‘We were sitting minding our own business, five of my sons around me,’ said Awad, ‘and we saw a flash of light, and then the explosion – it landed in in a rush of sound. We were scattered and then we rushed to each other, checking for wounds. We panicked and were terrified, bleeding and a poll of blood was at our feet.’

The family had heard mortar fire before and they believe that the general sense of insecurity in the area has limited people’s movement – fearing they may be hit by a stray mortar. They say that in this regard they feel they have lost their freedom, as whenever they sit outside there is the fear that something will happen.

‘The Berlin Wall in Germany did not stop people fleeing from one side of the border to the other,’ said Awad. ‘Do you think that a mortar can be stopped?’ He carried on. ‘This is terror. It cripples Jordan, paralysis it. People are terrified and they stop going to work. They lose their productivity. Some groups must use such inaccurate weapons to cause chaos, to spread their terror,’ he said. ‘So in a sense it’s very inaccuracy is a weapon’.

‘I’ve lost security inside my own house. The family is not stable as it used to be before,’ he said. He finds he and his wife are now constantly fighting. ‘It has harmed the harmony of the family – as if we have a ghost inside the house.’

The worst hit of their sons, Bashar, lost two pints of blood in the attack. Despite suffering no broken bones, his body was lacerated with flying glass and shrapnel wounds. Some of the shrapnel in him is in areas that surgery would damage even more if they tried to get them out, so he will remain with some in his body for life. When interviewed on the 22nd September, he had already been in hospital 41 days and expected to be there until October 20th – 69 days since the attack happened. The cost of those ten weeks of hospitalization will be covered by the Jordanian government. This is, perhaps, not surprising. His injuries were extensive. He had 35 shrapnel wounds in his back alone.

The main trauma, though, was in his leg. The main concern he had was that he will not be able to finish his medical degree. Perhaps ironically, Bashar has already had to flee the impact of explosive weapons already – when is medical training was moved from Donetsk to Kiev in Ukraine on the 25th May, 2015. About to enter is 4th year of medical studies, he is not sure if he will be able to walk properly and this might have a major impact on his ability to complete a course that requires extensive hospital bed visits. The impact of the blast on Bashar reflects the nature of the mortar round. His X-rays clearly showed how the metal penetrated upwards but it was not so impactful as to pass through his body. This left many of the shards in him, and they worked their way out through puss pockets. The shock waves of the blast also had an impact, causing him to develop tinnitus for three days after the attack. It was only, so his elder brother – a doctor – said, the fact that Bashar was slightly overweight that stopped more damage in his back. As it is he has already been told that he will never play football again and his leg is worryingly not healing as it was expected to. Since the incident his family have noticed him to be much quieter – he worries that he will have to stop his university education. 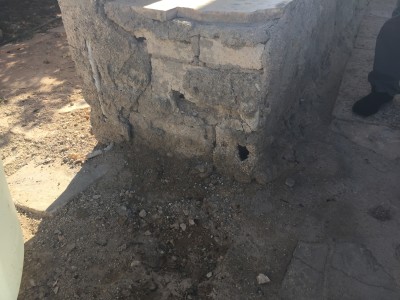 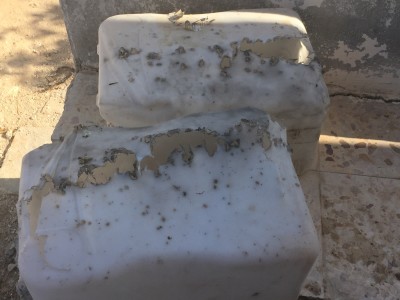 Water butt containers were hit during the strike – their absorption of the blast probably saved the family from more injury. 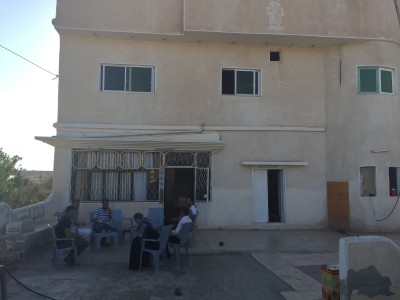 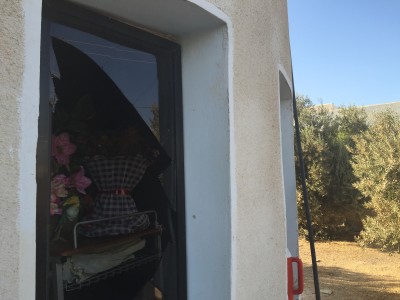 The strike shattered windows over seven metres away. 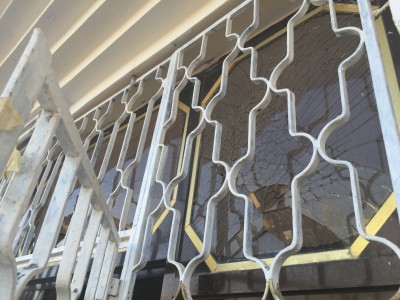 More damage to the house 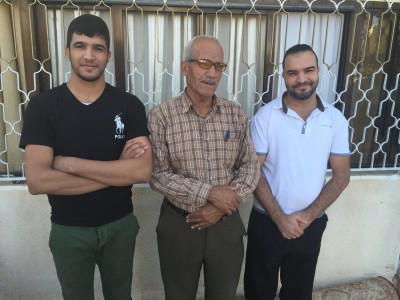 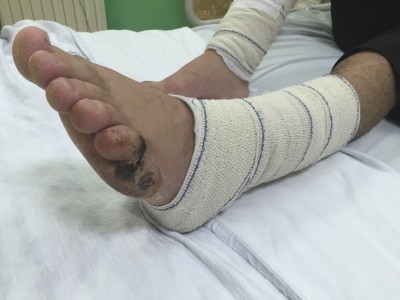 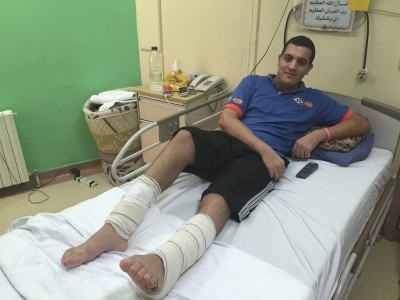 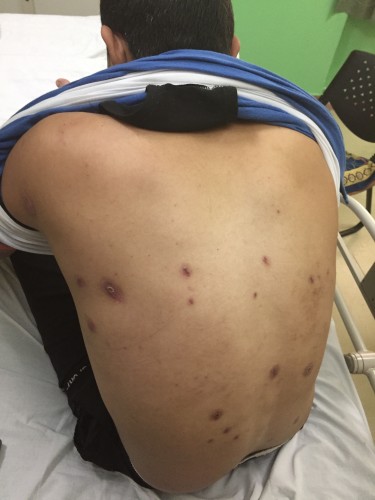