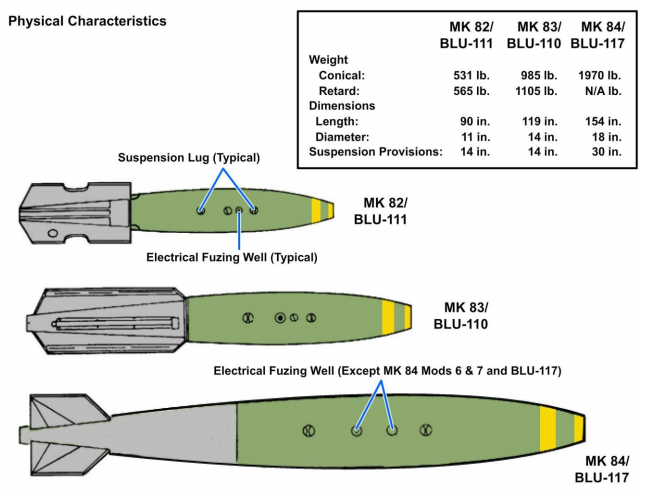 The physical characteristics of some of the MK 80 series bombs.

This report is part of a series of case studies that make up an analysis of the wide area effects of certain explosive weapons and the concern about their use in populated areas. The report – Wide-Area Impact – can be read here. A video also accompanies this case study – it can be viewed here. Iona Craig can be heard talking about the strike, and her view of the Yemen conflict, here.

In many cases in Yemen it is not possible to determine the specific type of weapons used in aerial attacks. The very fact of the destructive power typical of large air-dropped bombs means that after a blast there is commonly little in the way of firm evidence pointing to the responsible munition.

However, Saudi-led coalition forces in Yemen are thought to be making extensive use of aerial bombs with wide area impacts, including JDAM (GPS-guided) and Paveway (laserguided) aerial bombs. The warheads for these weapons are based on the widely-used Mk 80 series of general purpose fragmentation bombs.

Originally developed in the 1960s during the Vietnam War, these weapons are now part of the military arsenal of at least 24 countries, including the UK and US, and have been prominent in many recent conflicts and campaigns. 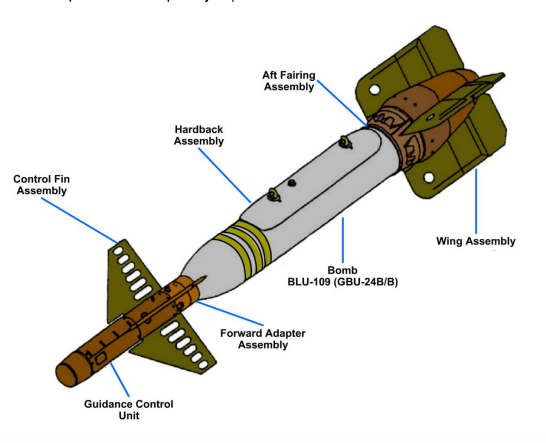 The Mk 80 series of bombs are a group of heavy, high-explosive weapons, weighing between 500lbs and 2,000lbs. The largest in this family is the Guided Bomb Unit-10 (GBU-10). The GBU-10 consists of an Mk 84 bomb fitted with a Paveway II laser guidance system. It stands at 4.32m, two and a half times the height of the average adult male.

Even without its guidance system, the basic bomb weighs 2,000lb (approximately 907kg). Nearly half of the weight of a general-purpose bomb is its explosive content. The GBU-10 contains 945lb (approx. 428kg) of high-explosive Tritonal.

These are extremely powerful bombs, with a large destructive capacity when used in populated areas. They can blow apart buildings and kill and injure people hundreds of metres from the point of detonation.

The fragmentation pattern and range of a 2,000lb Mk 84 bomb are difficult to predict, but it is generally said that this weapon has a ‘lethal radius’ (i.e. the distance in which it is likely to kill people in the vicinity) of up to 360m.

The blast waves of such a weapon can create a very great concussive effect; a 2,000lb bomb can be expected to cause severe injury and damage as far as 800 metres from the point of impact.

The wide-area impact of these weapons can be affected by a range of tactical, technical, and environmental factors, including fusing and the angle of attack. 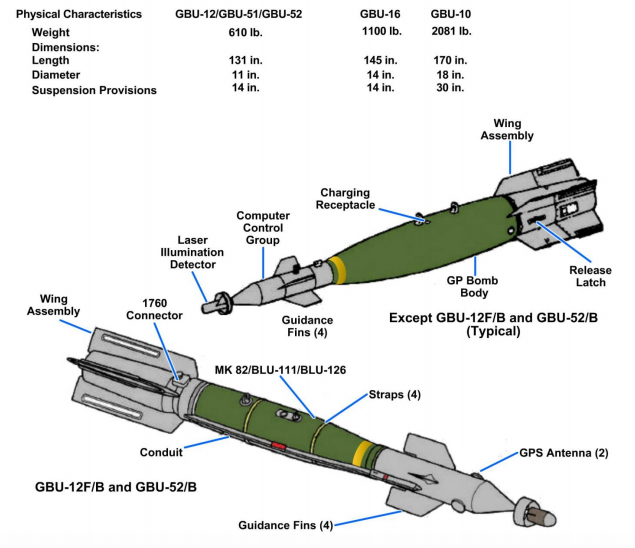 More characteristics of the GBU series.