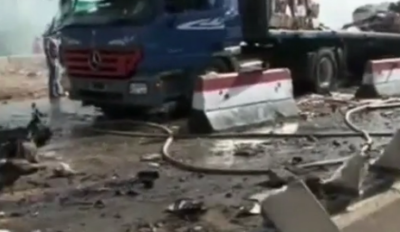 At least 48 people are believed to have died in a series of bombings across war-torn Syria, claimed by ISIS. Though the Syrian Observatory for Human Rights put the total at 53.

The attacks took place in Tartous, Damascus, Homs, and Hasakah, and all occurred during the morning rush-hour.

The deadliest of the attacks occurred at a checkpoint in Tartous, where a second and third suicide bomber targeted the crowds, security and emergency services responding to the first blast.

At least 35 are said to have been killed and over 40 wounded.

Tartous had seen little of such attacks until the bombings in May by ISIS in both Tartous and Jableh, that left 148 dead and injured 200.

In Damascus, a suicide car bomber and a suicide bomber on foot killed at least one officer and injured 3 civilians as the bombers breached a heavily guarded area, where families are housed at a military checkpoint.

Another military checkpoint was targeted in Homs. Three soldiers and a civilians were killed and 10 people were wounded as a car bomb detonated.

A Kurdish checkpoint was targeted in Hasakah a suicide bomber on a motorcycle detonated his explosives killing 8. The Observatory said the blast killed 5 Kurdish police and three civilians.

Another bomb was detonated in Qamishli, where in late July a truck bomb killed and injured over 200, but no casualties have been reported from yesterday’s blast.