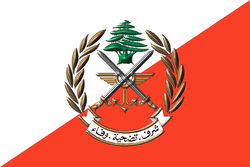 Lebanon is a country that suffers greatly from mines and UXO as well as IEDs.

They received $2-million worth of bomb disposal equipment from the United States. Equipment has included:

The equipment has been provided to help the International Security Forces, in particular, tackle the threat of IEDs used by Islamist militants.

The bomb disposal teams are often called to investigate incidents and suspicious objects. They are experienced at carrying out safe detonations. After they have safely detonated the explosives they will take the materials back to base for further investigation.