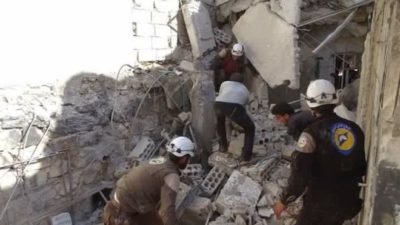 The airstrikes on Wednesday, October 26th 2016, in Hass, Idlib, struck a complex housing three primary and secondary schools, leaving at least 26 dead and 75 injured. At least 22 of the dead are said to be children.

The airstrikes were thought to have been conducted by Syrian or Russian planes, though the US-led coalition also target militants in the area.

AOAV records deaths and injuries from explosive violence around the world. In the course of the Syrian war, AOAV have recorded almost 70 attacks on schools. Yesterday’s attack was the third deadliest attack on a school throughout the course of the conflict, but the most deadly airstrike on a school with so many young children.

The most deadly was an attack by the Syrian regime on Aleppo University in January 2013, which killed at least 87 and injured 150. The second most deadly attack, saw a 48 killed, of which 41 were children, when two car bombs were used to attack a primary school in October 2014.

The Syrian regime has been responsible for many attacks on populated areas, such as homes, schools and hospitals – they have been accused of deliberately targeting these civilians.

So far this year, Syria has consistently suffered the most civilian deaths and injuries each month, apart from a brief respite in March, despite ceasefire violations.

Of those killed and injured in the last five years, 16,657 civilian deaths and injuries in Syria were from explosive violence perpetrated by state actors, predominantly Syria and Russia.

More civilians have been killed and injured in the explosive violence so this year than in the entirety of 2015. The situation appears to only be getting worse.