AOAV data found that the DoD announced contracts worth $1,550,000,459 for the acquisition of machine guns in the years examined. A part of this cost accounted for machine guns to be provided specifically for Iraq and Afghanistan. $4 million for example was contracted to the US Ordnance of Reno, NV, for the production of M2 Browning machine guns for Afghanistan.

As a further example of sheer lack of transparency, DoD contract analysis shows a total of 0 machine guns procured for Iraq. Further research tells a different story however; CSIS reports detailed a total of 653 machine guns procured for Iraq, and OCO reports 3,883. This is a total of 4,535 machine guns which fail to appear on the public DoD contract database. A similar pattern can be seen with reference to machine guns to Afghanistan; though $14 million worth of contracts pertain to the provision of machine guns for Afghanistan, no specific details of the volume of units is given. AOAV’s research found that 21,418 machine guns had in fact been sent from the US to Afghanistan over this time period. If these figures overlapped, it would indicate that each unit cost just over $600 to produce. AOAV’s research indicates that the M2 Browning for example costs $14,002 to replace each unit; thus the figure of $600 becomes highly unrealistic and suggests that the figure published by the DoD database represents only a fraction of true machine gun sales.

A machine gun is a fully automatic firearm, that can be either mounted or portable, and is designed to rapid fire bullets from an ammunition belt or magazine. Typically, bullets are fired at a rate of 300 to 1800 rounds per minute. Light machine guns and sub-machine guns are small enough to be hand held, and are classified as small arms. The key difference between machine guns and other categories is caliber, and whether the gun fires conventional bullets, shotgun cartridges or explosive rounds.

The M2 is a heavy machine gun, which is classified as a small arm due to it’s use of .50 caliber ammunition; that is, a 12.7 x 99mm cartridge. The M2’s rate of fire varies, depending on the model. It has an effective range of 1830m, and maximum rate of fire of 850 rounds per minute. It has been used extensively by the US army as both a vehicle mounted weapon, as well as aircraft armament. It is a belt fed, air cooled weapon which can engage in both semi-automatic and automatic fire.

The M2 can also be utilised as a sniper rifle, when equipped with a telescopic site. It was mainly used in this capacity during the Vietnam War. It can fire in sustained automatic or single use modes, and fires from a closed bolt for single shot accuracy. It has a simple design which makes it suitable for rugged terrains. The reliability of the weapon is increased by it’s quick change barrel system, which reduces exposure time to enemy fire and increases effectiveness.

M240B
The M240B is the infantry adaptation of the original M240, adopted by the army in the late 1990s. It is now the standard infantry medium machine gun of the US Army Corps, and also utilised by the US Navy and Coastguard. It is configured for ground combat, but can also be mounted on a tripod, vehicles, boats and aircraft. The M240B has only one gas setting, means that the fire rate is restricted to 650-750 per minute. The longevity of the machine gun is increased by the slower rate of fire, which decreases stress on the weapon. The M240B is susceptible to damage when dirty however, and will not fire if not maintained properly. The M240B has begun to be replaced by the lighter M240L in service.

M249 (LMG)
A lightweight, individually fed portable machine gun which provides the accurate fire of a rifle yet heavy volume which is provided by a heavy machine gun. Also known as a Squad Automatic Weapon (SAW). It’s normal rate of fire is 750 rounds per minute, up to a maximum of 1000 rounds per minute. The M249 can 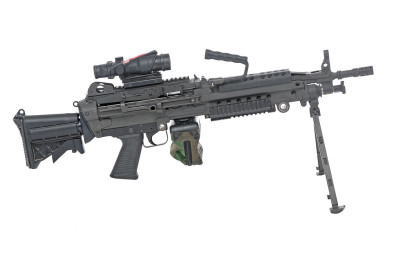 be used both as an assault rifle, or as a light machine gun. When utilised as a machine gun, it is used alongside tripods and additional barrels. These additions increase stability, and introduce the ability to fire more than three burst rounds. The weapon has a quick change barrel, and it’s basic load is 600 rounds of linked ammunition. The M249 is the standard squad automatic weapon in Afghanistan, but has been linked to reports of rusting problems and ammunition boxes becoming loose or falling off. Personnel in Iraq have also reported problems with weapons that can be up to 20 years old.

The M249 uses a standard ammunition feed of 200 round disintegrating belts, but is also capable of firing ammunition from a standard M16 belt inserted into the base of the weapon. This allows gunner to use ammunition from a standard M16 rifle in the emergency case of ammunition running out. The weapon also has a quick change barrel which allows rapid recovery from over heating or jammed barrels. The M249 fires the standard 5.56 x 45mm NATO cartridge. It is produced by South Carolina based FN Manufacturing, though there are talks to partially replace the weapon with the M27 Infantry Automatic Rifle.

M2A1
The M2A1 is a variant of the M2 Browning. It is a heavy machine gun that has formerly been known as the M2E2. It has a quick change barrel with a removable carrying handle.

Due to concerns in regard to about headspace and timing which must be manually set on a standard M2 when it had a barrel change.  This had caused numerous injuries.

The M2A1 in turn fixed this problem as it had fixed headspace and timing and a carrying handle which allowed the barrel to be changed in an instant. This improved timing and safety. The US Army began a conversion of M2HBs and some M2s into M2A1s in 2011.

It is a gas-operated, air-cooled, fully automatic belt-fed 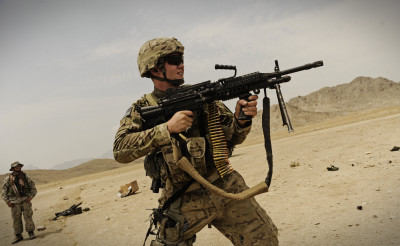 machine gun and is manufactured by FN Herstal. It can fire approximately 710 rounds per minute. The variants of the Mark 48 include the Mk 48 Mod 0 and the Mk 48 Mod 1.

Mk46
The Mk 46, or Mark 44, is a light weight, gas-operated, open bolt, fully automatic machine gun that can fire approximately 730 rounds per minute. It weighs just 7kg and uses 5.56x45mm NATO cartridges. Production of the Mk 46 was similar to that of the Mk 48 – beginning in 2003 and again was manufactured by FN Herstal.  The Mk 46 is smaller in calibre and dimensionally to its Mk48 counterpart.

M60
The M60 is considered the United States Machine Gun, with a 7.62mm caliber. The M60 is a family of American general-purpose machine guns that fires 7.62×51mm NATO cartridges from a disintegrating belt. Several types of live ammunition are approved for use in the M60; these include ball, tracer, and armor-piercing rounds. It uses a gas-operated, short stroke gas piston and can fire approximately 575 rounds per minute – not as much as many of the other machine guns listed here – with an effective firing range of 1,100 metres.

The M60 was created in 1957 and has now served with every branch of the US military. Its continues to be manufactured for the US military and often upgraded. It has replaced in many roles by other machine guns such as M240.

The M60E4 is manufactured purely by US Ordnance who have produced them since 2000. It comes in a variety of configurations and older M60 guns are now being upgraded to M60E4 configurations. It can fire 500-600 rounds per minute and as it is lightweight, it can be easily carried and fired from the shoulder accurately.