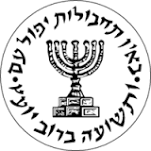 Mossad, is the Israeli security agency responsible for intelligence gathering outside of Israel. Like the Shin Bet, Mossad report directly to the prime minister of Israel, rather than the MoD.

They often cooperate with the IDF and with the security forces of other states, as well as the Shin Bet, particularly as the terrorist threat to Israel from its neighbours is high.

Mossad’s involvement with the intelligence units of other states has led to significant breakthroughs in cooperation, pre-empting peace agreements with countries previously hostile to Israel, such as with Jordan and Egypt – considerably increasing Israeli security.