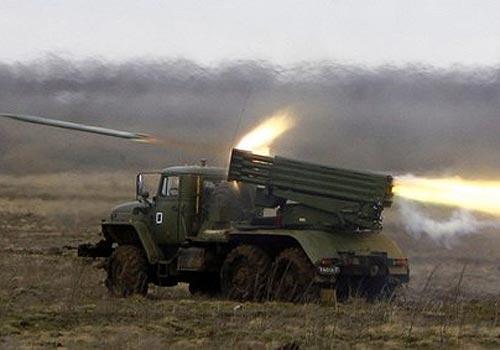 The third and final category of explosive weapons with a wide-area effect in our report ‘Wide Area Effects’ covers those that thunder down multiple munitions over a large distance in a short space of time. This category of ‘wide-area effect’ refers both to the technological capacity of some explosive weapons, but also the practice of delivering multiple munitions at once. At its most egregious, such a practice may be deemed tantamount to area bombardment. Area bombardment is defined as “any method or means which treats as a single military target a number of clearly separated and distinct objectives located in a city, town, village or other area containing a similar concentration of civilians or civilian objects.”

This practice is illegal under international humanitarian law (IHL).

Explosive weapons collectively originally came to the fore when fighting took place primarily between two standing armies in an open battlefield. The development post-World War Two of heavy weapon systems that are capable of bringing tremendous firepower to bear upon such a battlefield was a logical development. As such, a large variety of weaponry now exists that can rapidly fire munitions, concurrently or simultaneously, across a wide area.

As these weapons are often designed to attack an area rather than a precise target their use in populated areas is clearly inappropriate. Despite this, such weapons continue to be used in civilian populated areas. The heavy shelling or ‘barrage’ of populated areas has caused widespread devastation in countries around the world. It is extremely common for ground-launched explosive weapons to be fired in multiple numbers at a time. Often AOAV records incidents of explosive violence in which several types of explosive weapons are used simultaneously, as when fierce exchanges of rockets and mortars are documented, launched across a crowded marketplace. All too often, civilians are caught in the crossfire.

Between 1 January 2011 and 30 June 2015 AOAV recorded 539 attacks worldwide that hit ‘Multiple Urban’ location types at once. These attacks were the most destructive across AOAV’s dataset of explosive violence incidents. They account for 10 per cent of incidents but 30 per cent of total civilian deaths and injuries.

Weapon under investigation
Multi-launch rocket systems (MLRS) are by design intended to attack a wide area. They clearly have no place being used to try and hit a target within a populated area, and yet there has been widespread evidence of their use in varied contexts during the last five years.

There are many types of multiple rocket launchers. Perhaps the most infamous, and certainly the most ubiquitous, is the BM-21 Grad rocket. The BM-21 Grad rocket is a vehicle-mounted multiple rocket launcher. Originally designed and developed in the former Soviet Union in the 1960s, the Grad is now thought to be in the stockpiles of more than 50 countries, and in its various forms is the most popular multiple-launch rocket system in the world.

It is extremely difficult for AOAV to accurately capture all incidents in which Grads, or MLRS more generally, are in use on the basis of media reporting. The level of specificity required of journalists or civilian eyewitnesses is rarely met. As such AOAV’s data on the humanitarian impacts of MLRS is likely to be a significant underrepresentation of the harm they cause to civilians. While AOAV has recorded the use of MLRS in Libya, Somalia, Syria and Yemen in the last five years, more deaths and injuries were recorded from these weapons in Ukraine than in anywhere else in the world (39 per cent of worldwide harm from MLRS was in Ukraine – or 594 deaths and injuries).

Country under investigation
In April 2014 the political crisis in Ukraine escalated rapidly into armed conflict between state forces and rebel-armed groups. AOAV recorded its first incident of explosive violence in eastern Ukraine in May 2014.

Since then all parties to the conflict have made regular use of heavy explosive weapons like large-calibre artillery and multiple rocket launchers in populated areas. Several attempts to negotiate a political settlement to the crisis have directly addressed the use of explosive weapons with wide-area effects, in implicit recognition of the severe harm caused to civilians in the disputed regions of eastern Ukraine.

Weapons like the Grad have been prominent in the fighting in eastern Ukraine, and MLRS attacks account for ten per cent of all incidents of explosive violence in the country in this time period. Both the Ukraine government forces and rebel separatist groups are known to have used the Grad in populated areas.

On average there were 14 civilian deaths and injuries per MLRS attack. This is far higher than the average across all explosive weapons incidents in eastern Ukraine (at 9).