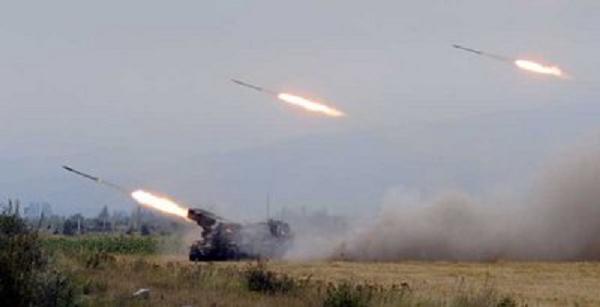 Grad means ‘Hail’ in Russian: a name that reflects the power and reach of the weapon system. Each individual Grad rocket stands almost 3m tall, and weighs approximately 66kg. Grads have a tremendously high rate of fire. A rocket leaves the launcher every 0.5 seconds, meaning an entire 40-rocket salvo can be launched in 19.5 seconds. After firing, it takes just ten minutes to completely reload the Grad launch vehicle and for the system to resume its attack.

Each of these rockets is a potentially devastating weapon in and of itself.

Grad warheads are designed to fragment on impact and are scored in such a way as to greatly maximise the spread of fragmentation across an area.

At the moment of detonation, the basic warhead scatters a total of 3,922 fragments, killing and injuring anyone in its midst. The area affected by the blast and fragmentation of each high explosive warhead that strikes the ground is measured at 700m sq.

This is an area roughly equivalent to a circle with a radius of 15m, although Grad rockets spit most of their fragmentation effects in an area forward of where the rockets land.

These rockets are all completely unguided, and will inevitably fall across a wide area. The original Grad system had a maximum range of 20km. More modern versions have seen the range doubled to almost 40km. If the full salvo is fired across the original Grad’s top range of 20km, the ‘lethal area’ (i.e. the area in which the rockets are likely to cause death to people on the ground) is at least 600m x 600m.