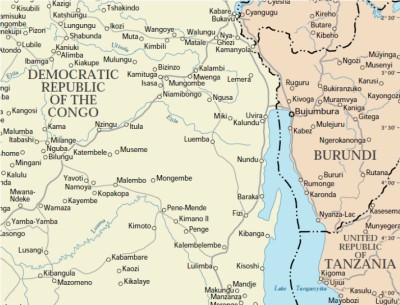 The Great Lakes region of Africa has, in recent times, been afflicted by staggering levels of violence.  Much of the violence has been perpetrated using small arms and light weapons (SALW), by far the weapons that cause the most harm globally, and which still cause great suffering in the region today.  Part of the problem is that, despite national, regional and international legislation controlling the possession, use and trade in SALW, international borders in the region are porous and the weapons by their very nature are easy to conceal, transport and pass to others.

Last year, AOAV, in collaboration with the Small Arms Commissions of Burundi and the Democratic Republic of the Congo (DRC), conducted an assessment along the border of the two countries, examining the incidence of SALW trafficking.  The assessment uncovered the level of trafficking across the border as well as the nature of the trafficking – the who, what, when, where, and how.  The subsequent report of this assessment lays out recommendations to combat the trafficking of illicit weapons, recommendations that have been used to draft a Joint Action Plan between the two countries.

Read the full report in French and English:

This report is about the trends in the cross-border trafficking of small arms and light weapons (SALW) along the border of the Democratic Republic of the Congo (DRC) and Burundi. The assessment took place along the River Rusizi/Ruzizi[1] and Lake Tanganyika, the two main geographic features that demarcate the border between the two countries.

The assessment established that there was rampant trafficking of SALW and ammunition across the border. The main conclusions of the assessment were:

This assessment report gives recommendations to combat the trafficking of SALW between Burundi and the DRC which has formed the basis of a bilateral action plan agreed by the two countries.

[1] In DRC the river is called Ruzizi, while in Burundi it is called Rusizi. Both names are used in this report simultaneously.

[2] Kanyanga refers to an alcoholic brew commonly made and consumed locally not only in Burundi and DRC, but in the entire Great Lakes region. Sometimes it has different names in different countries/communities.

Read the full report in French and English: