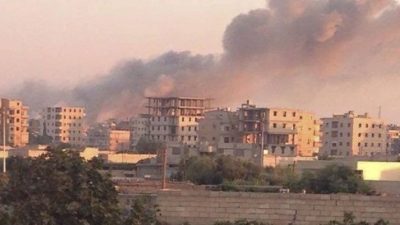 Yesterday, August 11th 2016, Russian airstrikes in Raqqa, an ISIS stronghold in Syria, hit civilian residential areas and a water pumping station. The attack left at least 70 civilians dead and injured and disrupted or cut off the water supply to the surrounding neighbourhoods.

The exact figure for those killed and injured in the airstrikes is unclear. Raqqa is Being Slaughtered Silently reported 20 civilians dead and 50 wounded, whilst the Syrian Observatory for Human Rights put the death toll at 24, along with six others whose affiliations are not confirmed.

Russia, on the other hand, said the airstrikes had destroyed an arms depot, a training camp and a chemical weapons factory. They also reported killing ‘a large numbers of militants’.

Since Russia announced its intervention in Syria in September 2015, the levels of harm from air-launched weaponry has significantly increased. Russia has frequently been implicated in the deliberate targeting of civilians and humanitarian infrastructure, such as hospitals.

The violence in Syria was greatly reduced through March after the ceasefire; the total deaths and injuries in that month were at least 50% less than those recorded in either any other month so far this year.