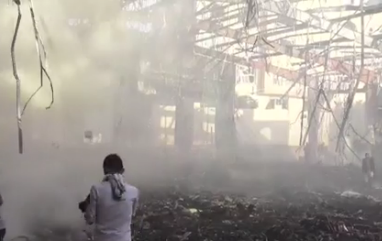 On Saturday, October 8th 2016, Saudi-led coalition air strikes hit a community hall in Sanaa, Yemen, where a wake was being held for the father of a senior official of the Houthi-run government. Though, it is thought that the death toll could still rise.

Those killed and injured included high-level officials but most were civilians.

The following days thousands were reported to have taken to the streets of Yemen’s capital to protest the air strikes that caused so much civilian harm.

The Saudi-coalition initially denied carrying out the strikes but later released a statement conveying its support to the families of the victims and its regret. They pledged an investigation into the into the attack with the assistance of the US.

The US are also reviewing their support for the Saudi-led coalition, which has already been heavily criticised by human rights defenders.

Stephen O’Brien, the UN Undersecretary General for Humanitarian Affairs, said that the attack ‘highlights once again the disproportionate risk for civilians when explosive weapons are used in urban areas.’

Compared to the previous year in Yemen, 2015 saw a 1204% rise in the amount of civilian deaths and injuries.

As part of a report released earlier this year, ‘Wide-Area Impact’, that analysed the wide area effects of certain explosive weapons and the concern about their use in populated areas, AOAV used Yemen as a case study, as last year Yemen suffered the most from the use of heavy aircraft bombs in populated areas – read the case study here.

Saudi Arabia continued to receive the support of the UK and US government, who have both continued to sell weapons to the country this year despite growing criticism from human rights groups.

Not all arms deals with Saudi Arabia necessarily contravene the Arms Trade Treaty. But the Saudi-led coalition’s indiscriminate airstrikes on civilian areas and possible direct targeting of civilian infrastructure are clear violations of IHL and thus grounds for stopping at the very least the sale of ever more destructive air power.

AOAV calls upon all signatories and parties to the Arms Trade Treaty to comply with their legal obligations and stop the export of lethal military equipment which clearly risks being used in violation of IHL. The sale of weapons to Saudi Arabia and other states has direct humanitarian consequences – and preventing their sale could have direct humanitarian benefit in curtailing further slaughter.