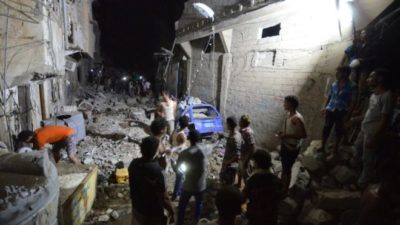 At least 25 were killed and 70 wounded in the airstrike that struck a residential area in Hudaydah, in Yemen, on Wednesday evening, September 23rd.

The strikes were conducted by a member of the Saudi-led coalition. The coalition were said to be targeting Houthi rebel leaders in the area.

An earlier death toll reported that 19 were killed but said that at that time many victims were still being pulled from the rubble and the toll was likely to increase.

Residential areas have been popular targets for the Saudi-led coalition airstrikes. As have other populated areas and civilian infrastructure. Airstrikes have consistently hit hospitals, markets, commercial areas, schools and public gatherings.

Last year, Yemen was the second worst affected country from explosive violence. AOAV’s Explosive Violence Monitor recorded 6,286 civilian deaths and injuries in 2015. The only country worse affected was Syria. Yemen however, saw more civilian victims of air-dropped bombs than anywhere else in the world in 2015. 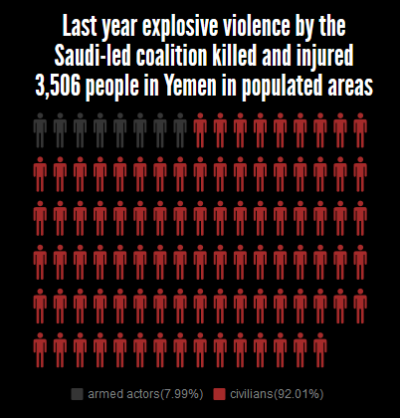 Most of the states selling weapons to Saudi Arabia are signatories or parties to the Arms Trade Treaty (ATT). This treaty intends to reduce human suffering by regulating the provision of arms which could be used in violations of International Humanitarian Law.

The total reported value – even with only limited data – of licences and sales to Saudi Arabia by ATT signatories in 2015 was more than $25 billion.

Calls for states such as the UK and the US to stop arming Saudi Arabia are increasing. A report from the Control Arms Coalition has highlighted the continuing large-scale international arms sales providing Saudi Arabia with military equipment, new weaponry and ammunition. Sales have not stopped despite many allegations of the Saudi-led coalition’s indiscriminate use of explosive weapons in Yemen leading to huge civilian casualties. Such targeting would be a violation of IHL.

Parties to the ATT like the UK are bound directly to keep to its provisions. Legally, parties are required to carry out comprehensive risk assessments to determine the likelihood of weapons being used in breaches of IHL. They are also obliged to prevent any transfer of items if they have knowledge that these items would be used in the commission of war crimes, genocide or violations of the Geneva Conventions – including ‘attacks directed against civilian objects or civilians protected as such.’ Signatories, like the US, are obliged not to act in a way which runs counter to the aims of the treaty.

In spite of huge amounts of evidence pointing to the indiscriminate use of explosive weapons by the coalition and suggestions that they have deliberately targeted both civilians and humanitarian infrastructure like hospitals, both the US and the UK continue to make arms deals with Saudi Arabia.

On Wednesday, the same day as the attack that killed and injured so many civilians the US cleared the way for a $1.15 billion sale of tanks and other military equipment to Saudi Arabia.

AOAV calls upon all signatories and parties to the Arms Trade Treaty to comply with their legal obligations and stop the export of lethal military equipment which clearly risks being used in violation of IHL. The sale of weapons to Saudi Arabia and other states has direct humanitarian consequences – and preventing their sale could have direct humanitarian benefit in curtailing further slaughter.