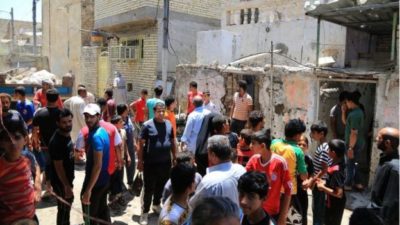 On Monday, May 30th 2016, a series of bombings were carried out across the Iraqi capital, Baghdad. In total, the attacks are thought to have killed at least 23, with a further 50 injured in the explosions.

The bombings were perpetrated by ISIS militants. The militant group’s stronghold in Fallujah, 40 miles west of Baghdad, is under increasing attack from Iraqi forces, which are supported by the US-led coalition. The bombings in Baghdad are thought by some to be a tactic to divert the attention of security forces from Fallujah and other frontlines.

Two of the attacks took place in predominantly Shiite neighbourhoods of Baghdad, Shaab and Sadr City. The remaining incident was carried out outside government offices in Tarmiya. All the attacks were all carried out with improvised explosive devices (IEDs).

In Shaab, northern Baghdad, a car bomb killed 12 and injured over 20 more at a checkpoint near a commercial area. At least eight of those killed are said to be civilians.

The only attack carried out in a Sunni area, was in Tarmiya, north Baghdad. In Tarmiya a suicide bomber detonated a car full of explosive at an outdoor market, near a police station and government building. The blast in Tarmiya killed eight and injured 21. Three of those killed were police officers.

In Sadr City, another suicide bomber detonated his explosives at a market – killing three and wounding 10.

This series of attacks mirror similar incidents over the last month. On May 17th a series of blasts across the capital left 77 dead and 140 injured. An attack at a Shiite market in Baghdad on May 11th killed 64 and injured 87. Further bombings have been perpetrated by ISIS in many areas of Iraq, including Baquba and Samawa.

From January to April this year, explosive violence perpetrated by ISIS was responsible for at least 992 civilian deaths and injuries in Iraq. Of these, 97% were caused by IEDs.