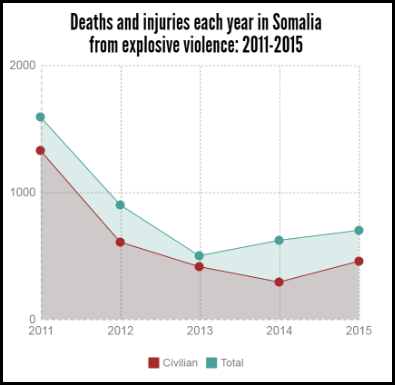 AOAV’s Explosive Violence Monitor has recorded a total of 4,303 deaths and injuries in Somalia from explosive violence in the last five years (2011-2015).

Civilian deaths and injuries from IED attacks account for 74% of the total civilian toll from explosive violence. Where a perpetrator has been identified, al Shabaab has committed all IED attacks in Somalia. 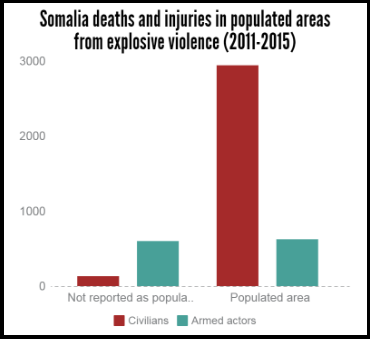 When explosive violence has been used in populated areas, civilians account for 91% of all deaths and injuries. Commercial premises, hotels, markets and public buildings have been the most impacted populated areas.

Suicide attacks account for 15 of the 29 IED attacks recorded in this period. These caused 67% of civilian deaths and injuries from IED attacks.

So far this year (Jan. – Sep.), at least 1,164 have been killed and injured by explosive violence in #Somalia. https://aoav.org.uk/explosiveviolence/somalia/

4,303 deaths and injuries in #Somalia from explosive violence in the last five years (2011-2015). https://aoav.org.uk/explosiveviolence/somalia/