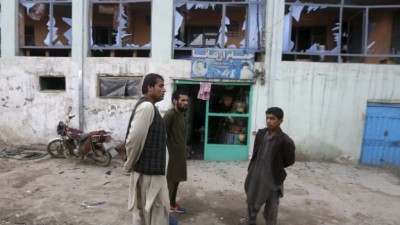 Tuesday, March 19th 2016, saw the largest attack by the Taliban this year in Afghanistan. It marks what some call the start of the ‘fighting season’ – with more large-scale attacks by the Taliban across the country expected.

The attack took place at morning rush hour in a busy neighbourhood in Afghanistan’s capital, Kabul.  An initial suicide bomber blew up a bus filled with explosives and soon after further suicide bombers detonated their explosives, along with an attack by armed Taliban insurgents.

The attack was initially said to have killed at least 28 and injured a further 329, though the death toll quickly rose to 64. The majority of the casualties are civilians, though soldiers and security actors are said to be among the casualties as well.

The Taliban quickly claimed responsibility for the attack, boasting about it on social media.

A second blast in Kabul followed a few hours later – it was said to be caused by an IED. There are reportedly, however,  no casualties from this second attack.

The Taliban have been responsible for a string of deadly explosive strikes this year – the most notable being recent bus bombings and an attack on a restaurant. However, the group recently announced the start of the ‘spring offensive’, which means the scale and frequency of attacks is likely to increase.

AOAV Explosive Violence Monitor recorded 19 incidents in Afghanistan of explosive violence by non-state actors in the first three months of 2016 alone, which resulted in the death and injury of 252 civilians. Of these attacks 10 are known to have been caused by the Taliban, with 192 civilian death and injuries.

Attacks by non-state actors accounted for 91% of all civilian deaths and injuries between January and March.

All Taliban attacks recorded in this period used Improvised Explosive Devices (IEDs), of which at least 64% were suicide bombings. Suicide attacks were found by AOAV’s Explosive Violence Monitor 2014 to be the most deadly form of IED attack worldwide.

Over the last five years in Afghanistan, IED attacks have been responsible for 80% of all civilian deaths and injuries.