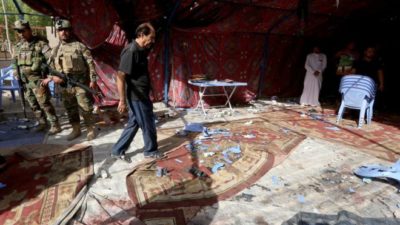 On Saturday, October 17th 2016, a suicide bomber targeted a funeral gathering in northern Baghdad, Iraq. The attack killed at least 35 and wounded 63.

The bomber was said to have entered the funeral tent as lunch was served.

ISIS, in an online statement, claimed responsibility for the attack, targeting the Shia mourners.

Other attacks throughout the day on Saturday, saw 12 killed in two other incidents in Baghdad by armed men.

Eight were killed and 11 wounded in Tikrit as suicide bombers detonated their explosives at a federal police position.

In the Ishaqi area, south if Samarra, two armed men killed the wife and three children of the commander of local tribal forces.

These attacks, saw a total of at least 59 killed. The day before Saturday’s incidents, ISIS executed 58 people in Mosul suspected of taking part in a plot to help deliver Mosul to Iraqi forces. After uncovering the plot, the suspects were drowned.

Shiite populations are often a target of ISIS attacks. Some of ISIS’s recent attacks targeting Shiites include: the truck bombing in a commercial district in Baghdad that caused over 300 deaths and injuries in the most lethal attack in Iraq since 2007, the suicide bombing at a football stadium killing at least 41 and injuring 105, suicide attacks on the Shiite majority city of Hillah, killing at least 47, and a suicide bombing  at a market targeting Shiite civilians, which killed at least 67 and injured more than 150.