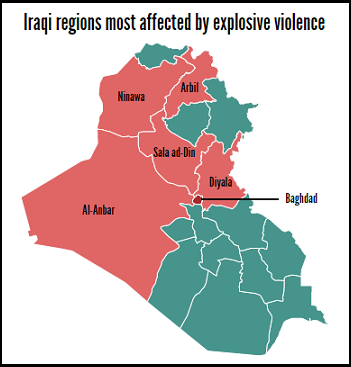 A suicide bomber in Iraq killed at least 16 people and injured a further 54 on May 9th 2016. The attack is reported to have taken place in a commercial area, in the Shiite neighbourhood of Baquba, eastern Iraq.

The suicide bomber detonated the bomb in an explosives-filled minibus, on Monday evening, near to a restaurant and bakery where people were eating.

Though no one, as of yet, has claimed the attack, it is widely believed to have been committed by ISIS insurgents. ISIS frequently targets populated areas in Shiite-dominated areas. A double suicide bombing on May 1st , for instance, targeted another Shiite populated area in Samawa, southern Iraq. The attack on May 1st killed 32 and injured at least 75.

ISIS attacks on Shiite generally target highly populated areas, what are known as “soft targets”. In these events the casualties are almost exclusively civilians.

For example, when explosive weapons are used in a market, AOAV’s data shows that the vast majority of victims are civilians – 99%.

AOAV’s Explosive Violence Monitor 2015 found that 4,078 civilians were killed or injured by improvised explosive devices (IEDs) in Iraq. This accounted for 80% of all civilian deaths and injuries from explosive violence in Iraq in 2015.

It is evident that suicide bombings, particularly, are extremely lethal and are seeing wider and wider use. AOAV’s Explosive Violence Monitor 2015 found that of all IED attacks, the ones that posed the most danger were suicide attacks.