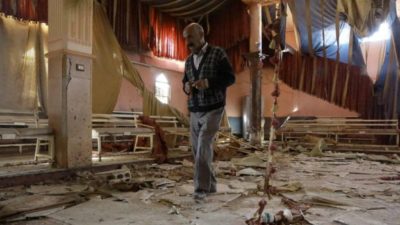 At least 30 were killed in the attack on the wedding party in Hasakah, Syria, on Monday, October 3rd 2016, when a bomb was detonated.

The death toll is not yet certain with mainly seriously injured. The Syrian Observatory for Human Rights (SOHR) gave a toll of 31, including the groom and a leading Kurdish party figure. State media, on the other hand, said that at least 30 were killed and 90 were injured. Others reports also suggest that the groom was injured but alive.

It was reported that the suicide bomber detonated their explosives as the bride and groom exchanged their vows.

Hasakah is mainly controlled by the People’s Protection Units, otherwise known as the Kurdish YPG.

Earlier in the day, two suicide bombers detonated their belts in government-held Hama, killing three and wounding 11. The second suicide bomber detonated 15 minutes after the first in the same location.

ISIS appear to be responsible for all three bombings.

In Syria’s eastern Aleppo, Russian or Syrian warplanes completely destroyed the main hospital M10, leaving it completely out of service. Many workers and other civilians were also killed and injured during the airstrikes.

Whilst it is true that of these, 16,657 civilian deaths and injuries in Syria were from explosive violence perpetrated by state actors, predominantly Syria and Russia, and this continues to be true of this year also, non-state violence have also been a constant threat to the lives of Syrian civilians.

AOAV condemns the use of violence against civilians and calls upon all groups to reject the deliberate targeting of civilians. States must urgently address the threat of suicide bombings and other forms of IED attacks. Reports by AOAV show the increasing use and harm of suicide bombings around the world.  It is a growing reality that highlights the need for urgent preventative measures that States should establish – such as stockpile controls – to limit groups’ ability to produce these and other IEDs. The use of weapons with wide-area impacts should also remain of concern; due to the severe impact these have on civilians. All actors must urgently address the civilian harm in Syria. The situation in Syria requires an urgent response to prevent further suffering of Syrian civilians, who have for too long borne the impact of the violence in their country.