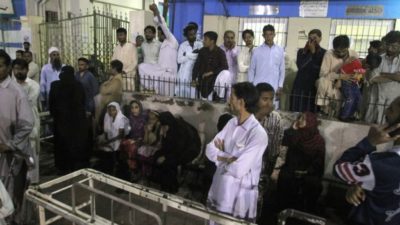 On Saturday, November 12th 2016, a suicide bomber attacked a gathering of worshippers at the Sufi shrine Shah Noorani, in Balochistan province, Pakistan. The attack killed at least 52 and injured more than 100.

Hundreds had been participating in a ritual dance at the shrine as the bomb exploded. As the shrine is located on a remote hill-top in Khuzdar it took rescue services several hours to reach the wounded.

Both Sunni and Shi’a sects visit the shrine, devoted to a Suni saint.

ISIS claimed responsibility for the attack and released a photo of the alleged attacker through its Amaq news agency. They said the attacker targeted ‘polytheists’.

This is not the first attack ISIS has conducted in Pakistan. Only last month did ISIS, alongside another Pakistani militant group, conduct a gun attack at a police academy, which killed more than 60. Other IED attacks have also been recorded in Pakistan, as perpetrated by ISIS this year – though on a far smaller scale.

However, it is reported, that the Pakistani government still insists that ISIS has no organised presence in the country.

In 2015, AOAV’s Explosive Weapons Monitor recorded 95 IED incidents throughout Pakistan which have killed or injured 968 civilians. 13 of these incidents were suicide bombings, but responsible for a disproportionate 471 of the civilian deaths and injuries.

Despite the high numbers, IED attacks and the total civilian deaths and injuries from such violence in Pakistan, has significantly reduced in the last five years. However, the lethality of each attack has increased.  It is hoped that the decrease in deaths and injuries continues and that further counter-IED measures focus on preventing these highly lethal incidents.