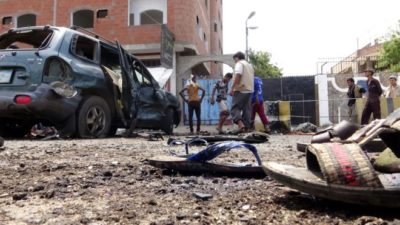 The attacks that took place Monday morning, May 23rd 2016, are said to have killed at least 45 and injured 60 in Aden, south Yemen.

The first incident, a car bomb, targeted army recruits as they were lining up to enlist. The recruits were said to be hoping to join the fight against the Houthi rebels in Northern Yemen. This first blast is believed to have killed at least 20.

The second suicide bomber detonated his vest among another group of recruits. The bomb killed 25 as they waited outside the home of an army commander.

ISIS – who have continued to take advantage of the increasing instability throughout Yemen since the outbreak of civil war in March last year – were quick to claim both attacks.

It was only last Sunday, May 15th, that ISIS targeted police recruits lining up outside a centre in Mukalla, Yemen. The blasts killed 47 and injured 51.

AOAV found that of the incidents recorded in 2015, 17 incidents of explosive violence were perpetrated by ISIS. These 17 incidents were all perpetrated by Improvised Explosive Devices (IEDs) and killed and injured 757 civilians. Of these IED attacks, at least six were suicide bombs, which were responsible for 71% of all civilian deaths and injuries from ISIS IED attacks in Yemen.