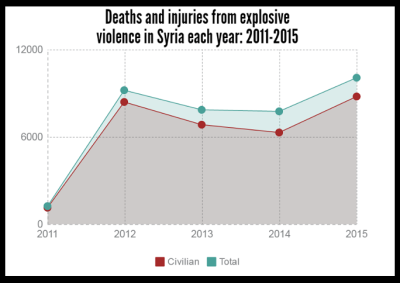 Syria has remained one of the top five most impacted states between 2012 and 2015 and consistently taking either 1st or 2nd place in the those years.

Where the actor has been identified as either state or non-state, AOAV has found that it is state actors that have been responsible for 71% of all civilian deaths in the last five years (2011-2015). Of the explosive violence perpetrated by known state actors, the Syrian government has found to be responsible for 76% of civilian harm, Russia 15%, and the US-led coalition 6%. 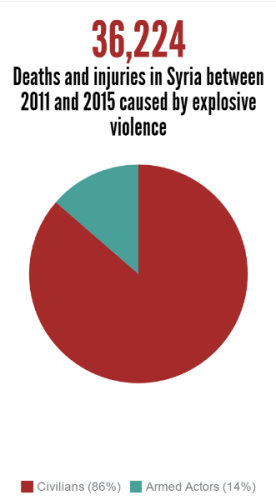 During this period, 87% of the civilians killed and injured in airstrikes were in populated areas. Markets, residential areas, and hospitals have been the targets of many attacks.

Of the civilian deaths and injuries recorded, almost 60% occurred in eastern Aleppo and the rest of the governorate.

36,224 deaths and injuries as a result of explosive violence in #Syria from 2011 to 2015. https://aoav.org.uk/explosiveviolence/syria/

The Syrian government is responsible for 54% of all explosive violence in Syria. https://aoav.org.uk/explosiveviolence/syria/

#Syria remains one of the top five states most impacted by explosive violence. https://aoav.org.uk/explosiveviolence/syria/