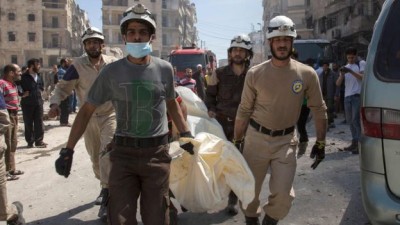 With over 350 deaths and injuries recorded across Syria since Friday, March 22nd 2016, Syrian civilians are again highly vulnerable to the deadly impacts of explosive violence.

On Friday airstrikes hit rebel-held areas in Aleppo. The attacks, carried out by Syrian government forces, killed at least 25, and wounded a further 40.

The violence continued into the weekend, with dozens of shells exploding across Aleppo.  The shells dropped by government forces in the city on Saturday killed at least 27, whilst those from rebel forces killed six and injured 25. Further airstrikes by Russian forces in Aleppo killed 12 and left at least 22 injured.

Aleppo was not the only area in Syria to be affected by such explosive violence on Saturday. Just east of the Syrian capital, Damascus, the city of Douma was targeted. In strikes upon this city, at least 13 are reported dead. Women and children were reported among the dead, as the shells landed in busy markets and residential areas.

Saturday, also saw the death of 2 civilians in Talbisseh, in central Homs, from government airstrikes.

The violence by non-state actors persisted on Sunday, with Jabhat al-Nusra and other Islamist militants firing shells into Aleppo. At least 11 were killed and six injured in this explosive violence.

On Sunday too – for the third straight day – both Syrian forces and rebel groups targeted Aleppo. Syrian rebels were responsible for at least 10 civilian deaths, and Syrian government forces for 16.

With this violence over the weekend, the heavy toll on civilians is obvious. The explosive violence between Friday and Sunday alone led to at least 215 deaths and injuries.

This weekend violence puts Syrian civilians at further risk as the ceasefire appears to have virtually collapsed.

Yesterday, Monday April 25th 2016, saw the largest attack since the ceasefire was introduced. The rebel shelling in government-held neighbourhoods in Aleppo left at least 19 dead and as many as 120 injured. This attack brings the total in the last four days to at least 354 deaths and injuries.

AOAV strongly condemns the use of violence against civilians and calls upon all groups to reject the deliberate targeting of civilians. The use of weapons with wide-area impacts should also remain of concern; due to the severe impact these have on civilians. All actors must urgently address the civilian harm in Syria and agree to a ceasefire. The situation in Syria requires an urgent response to prevent further suffering of Syrian civilians, who have for too long borne the impact of the violence in their country.