This report is part of AOAV’s investigation into the DoD’s small arms expenditure during the War on Terror. Our research found many discrepancies between the contracts published on the DoD’s website and those found on the Federal Procurement Database System- research that can be read here. For information on what a small arm is, please see here. To understand more about US DoD contracts visit here. The investigation also included an examination of US expenditure for small arms for Iraq, which can be read here, and Afghanistan, see here.

In July 2014 the SIGAR – Special Inspector General for Afghanistan Reconstruction –issued a report on the Afghan National Security Forces weapons accountability. It states that the DoD provided 747,000 weapons and auxiliary equipment valued at approximately $626 million to the ANSF since 2004. This included 465,000 small arms.

The report’s main concern is that there is cause to believe that the weapons were not being registered and monitored correctly. The DoD was responsible for implementing a program to provide for the registration and monitoring of defense articles transferred to Afghanistan, as well as for the oversight and accountability of these weapons after their transfer to the ANSF. The aim of the report was to – as fully as possible – evaluate the DoD’s procedures for monitoring the weapons provided to the ANSF.

What becomes immediately clear from the report is that there were multiple ways in which these weapons were being recorded. For the DoD two systems were used to record the weapons – one to track the shipment of weapons from the US, and the other to track the receipt of the weapons in Afghanistan. However, the two databases were not coordinated and they required separate manual data entry. This meant errors occured, such as duplicates, missing information and incomplete records – the SIGAR found that 43% of the 474,823 weapons recorded (203,888) had missing information/duplication.

The Afghan National Army (ANA) had a separate system of records to those of the DoD so it would be hoped that they might account for those weapons that the DoD’s system had failed to record accurately. Unfortunately, this was not the case. The SIGAR found that these records too were incomplete and could not be relied upon for accurate information. Furthermore, the Afghan National Police (ANP) had no standardized system to maintain records.

This has meant that the DoD’s ability to monitor weapons (particularly after transfer) was severely limited. When SIGAR carried out inspections of the weapons records (both before and after transfer to Afghanistan), the weapons themselves, and their storage, what they found was very concerning.

SIGAR did find that there were more than 112,000 weapons that were surplus to requirement, including 83,184 AK47s, and at the time of SIGAR’s findings, the DoD was still continuing to supply weapons at a greater rate than needed. The DoD provided weapons based on the ANSF force strength of 352,000 despite the plans to reduce 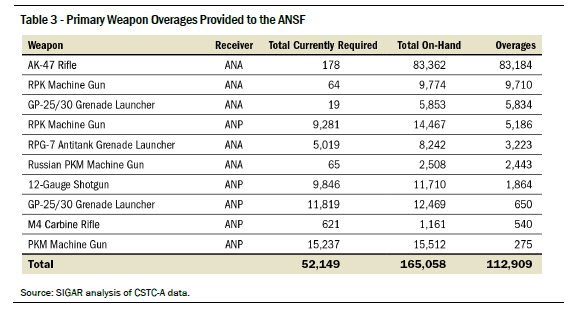 personnel and the already apparent surplus of weapons.

Moreover, it was made clear that there was a serious risk of theft or loss due to the lack of complete inventory records for an estimated 36 percent of weapons procured and shipped to Afghanistan from 2004 through 2008.

The risk was increased particularly by the poor records kept by the ANA and ANP. At the ANA Central Supply Depot – that was controlled and managed by Afghans with the assistance of US advisors – an inventory could not be produced for the SIGAR inspection. It appeared that many weapons could not be located and that 23 out the 44 weapons chosen at the depot could not be located on the ANA’s central recording system – the CoreIMS. The SIGAR further found that when accounting for the weapons total, the totals for 8 out of the 11 weapon types were incorrect. Though other site tests carried out did appear to show more accurate records there were severe limitations in the accuracy of these tests due to security and time constraints.

These findings were of great concern. Though the standards of the records kept, especially the inaccuracies in relation to serial number, before transfer to Afghanistan were poor, the records and monitoring system in place in Afghanistan were so incomplete that even basic inventory tests could not be carried out. These concerns are heightens by the fact that there were so many weapons that were surplus to requirement, which were at risk to theft and loss. The evidence presented in the SIGAR report suggested little had been done by the DoD to mitigate the issues and improve performance. In fact, as already stated the US continued to supply more weapons than needed despite the danger this could present if monitoring continued as it did at the time of the SIGAR report.