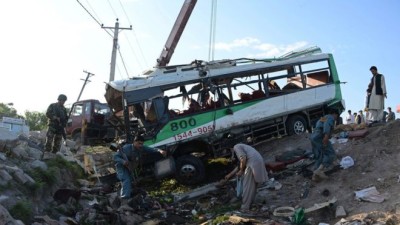 This Monday – 11th April 2016 – a roadside bomb hit a minibus in the Bagrami district just east of the capital city, Kabul.

The minibus was carrying workers from Afghanistan’s Ministry of Education to their offices. The attack killed two and wounded seven.

Only hours later, a suicide bomber on a motorised tricycle crashed into a minibus carrying army recruits from Jalalabad to Kabul for training. The attack took place just outside Jalalabad, in the Nangarhar Province of eastern Afghanistan. The attack is reported to have killed 12 and injured a further 38, some of whom are said to be in critical condition in the main hospital in Jalalabad.

Insurgency groups in Afghanistan appear to be increasing their attacks, with a suicide bomber last week killing six and injuring a further 26, among which were security officers.

AOAV’s Explosive Violence Monitor recorded 35 explosive attacks in Afghanistan between January and March 2016, killing and injuring 277 civilians. Afghanistan has continued to struggle with insurgency groups this year, with at least 19 of these attacks in the last three months committed by non-state actors, predominantly from the Taliban, but also by ISIS affiliates.

Our wider overview of explosive violence attacks in Afghanistan can be read here.

All attacks in this period by known perpetrators as well as these most recent attacks were carried out using IEDs, and at least 64% between January and March were suicide bombers. AOAV’s Explosive Violence Monitor 2014 found that suicide attacks were the most dangerous form of IED attack worldwide.