In late 2015 and early 2016, Action on Armed Violence spent months looking at the US Department of Defence’s expenditure on small arms, ammunition and attachments. Our focus was on 14 years worth of contracts issued during the War on Terror. In so doing we found that over $40 billion worth of contracts had been issued during this time for such weaponry. One key element of our research was into weapons bought by the US government and given to the military forces of Afghanistan.

Such weapon numbers provide hard evidence of the huge levels of weaponry distributed by the US government to the Afghan government. The additional  $479,118,807 accounts for small arms ammunition recorded from the ASFF purchases document and the FPDS from the DoD published contracts.

After submitting to the DoD our findings in March 2016, AOAV provided the DoD the opportunity to submit a list of the small arms they believe have been supplied by the US DoD to Iraq and Afghanistan.

In August 2016, the DoD provided AOAV with a table of data summarising the small arms provided between CY 2004 for Afghanistan and CY 2005 for Iraq until June 2016.

Unfortunately, as the DoD only provided a summary we were not able to identify when the small arms were provided and compare this to our own data. As the data supplied by the DoD also covers September 2015 – June 2016, where there are discrepancies which see the DoD account for more pistols, for example, than AOAV found to Afghanistan, it could be that they were purchased in this nine-month period. The more likely alternative however, is that the complete lack of transparency surrounding Foreign Military Sales – and small arms contracts in general – meant that the AOAV researchers had not been able to find these small arms provisions and that many others may simply be unfindable also.

The below outlines the published data that has been used in our analysis and more detail as to the figures and DoD transparency. 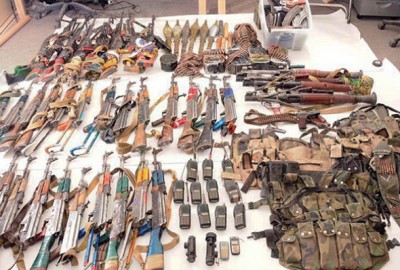 US Department of Defence contracts
Our initial analysis of the DoD’s daily record of contracts worth over $7 million, showed that $180 million worth of published contracts were for small arms, ammunition and attachments destined for Afghanistan.

This is for contracts that specifically stated Afghanistan on the contract details.  Some of these contracts, though, might have been for weapons being sent to other countries than Afghanistan (i.e. that Afghanistan was part of a number of destination countries), but the vast majority appeared to have been that it was just for Afghanistan.

AK-47s
AOAV found that out of the $180 million in small arms, ammunition and attachments for Afghanistan stated on the DoD, there was no mention of provision of AK-47s. In further research however, it was found that 95,981 AK-47s were found to have been provided by the US to the Afghan government, as a part of a total of 503,328 small arms provided in the years examined. The net worth of these AK-47 contracts was $59,215,000. Not one of these appeared on the DoD contract database. Overall, as little as 3% of small arms contracts destined for Afghanistan have been found to appear on the DoD database. This suggests a significant lack of transparency.


US Federal Procurement Data System
However, it might be that far more than $180 million of US tax-payers money was issued in contracts for Afghan government weapons and ammunition.

However, the FPDS shows that contract number as listed beside 14 other payments – totalling some $17,465,298. We have no way of knowing, though, if all of this $17.5 million worth of contracts was for Afghanistan-sent arms. US Freedom of Information requests on such contracts were returned heavily redacted, and the DoD press office did not give clarity on this matter. In the absence of such transparency, we assumed that once a contract number was issued all future sales under that number were for the same reason (i.e. arms to Afghanistan).

If this assumption is right, then the DoD only listed 39% of the total worth of FPDS valued contracts for Afghan-bound arms purchases by the US government.

Indeed, as we continued our research we found that even this FPDS figure may not have shown the whole picture.

Overseas Contingency Operation (OCO) Reports
For instance, payments listed on US OCO request reports between 2007 to 2013 show that $462 million worth of small arms (including attachments and ammunition) were listed as part of the Afghanistan Security Forces Fund (ASFF).

The OCO reports also give insight into the unit cost of each weapon – which often differs each year. We can see from the reports that the DoD typically spent $7000 on each M24 sniper rifle, whereas the amount the DoD would spend on each M2 .50 Calibre Machine Gun ranged from less than $8000 to over $25,000. Explanation as to this wide range of costs was never given.

For some years, the total amount enacted for the previous year may be presented and when they are they often appear different to what has been recorded; sometimes they are more, other times they are less. This may be due to overspend or other unrecorded/unpublished costs but the reporting of the total enacted is sporadic. Hence, only the figures for each year as cited in the years corresponding document have been cited. This however means that our total findings from the OCO reports may be slightly over or under the true figure, due to the unaccounted for inconsistencies between reports.

AOAV have however, found that these figures are corroborated by the ASFF purchases document. This found there to be additional small arms and fillled in for the missing 2008 OCO report. The SIGAR also accounted some additional PKM and RPK machine guns and the GAO report for small arms procurement for Afghanistan prior to 2009. All data for the total $ 982 million on small arms and ammunition can be seen in this dataset.

Cause for concern
Apart from a potential waste of US tax-payers money, though, there is a much deeper concern about 503,328 small arms being sent to Afghanistan.

The huge numbers of small arms being sent to Afghanistan means that the government there now has a surplus of weapons. 503,328 small arms sent to a country with an army of about 183,000 and a police of about 151,000 – weapons that are on top of the existing weapons owned by the Afghan government and those from other international donors (approximately 135,000 according to the GAO report). 10,000 Ak47s can be added to this that the Russians also recently gave them.

Such a surplus has prompted the US’ own Special Inspector General for Afghanistan Reconstruction to highlight concerns that such weapons might fall into the wrong hands – those of insurgents. SIGAR notes, for instance, that US supplied weapons are vulnerable to theft and loss.  And this certainly echoes concerns highlighted in other reports of US weapons falling into the hands of terrorists.


A lack of transparency is also pervasive. As little as 3% of all Afghan small arms contracts appear to have been listed publicly by the DoD. A DoD Inspector General report, for instance, listed 45 contracts as being for small arms to Afghanistan. Of these, AOAV found only 5 were announced by the DoD, despite 8 being worth over $7 million (the current minimum for a contract announcement on the DoD).  Of the remaining 5 that appear on the DoD, in 4 there was no mention that the small arms were destined for Afghanistan.  This means that in only one case of 45 known small arms contracts for Afghanistan was listed by the DoD in its contract database.

Such missing information and inaccuracies have been a concern for both the GAO and the SIGAR. A GAO report into small arms purchases for Afghanistan found that 36% of the weapons procured up to 2009 had incomplete records. This left the weapons given to Afghanistan at risk of unaccounted theft, loss and misuse. A SIGAR report came 5 years later and found similar problems – duplicate records, missing information and incomplete records – for 43% of all the weapons. The SIGAR found records at some armouries in Afghanistan that were so incomplete that even basic inventory tests could not be carried out. It was also clear many weapons were missing. The SIGAR report found more than 112,000 weapons surplus to requirement, including 83,184 AK47s.

What this means
AOAV’s analysis shows that the US DoD has – during the from Sep 11, 2001 to Sep 10, 2015 – provided far more weapons than has been needed to Afghanistan, and at times paid extortionate unit costs. Our research suggests that millions of dollars have been wasted and that a lack of records and monitoring of weapons appears to have made it relatively easy for weapons to fall into the hands of insurgents. Our findings also highlight a significant lack of transparency from the DoD, in terms of contracts being published, the nature of such contracts and how much these contracts are to the tax payer.

Most importantly though, our research shows that at least 503,328 small arms have been sent to Afghanistan during the War on Terror – of which many were AK47s.  Where such weapons are now it seems is anyone’s guess – and that should concern us all.

This report is part of AOAV’s investigation into the DoD’s small arms expenditure during the War on Terror. Our research found many discrepancies between the contracts published on the DoD’s website and those found on the Federal Procurement Database System- research that can be read here. To read more about the data provided by the DoD, see here. For information on what a small arm is, please see here. To understand more about US DoD contracts visit here. The investigation also included an examination of US expenditure for small arms for Iraq, which can be read here.

As part of this report, we analysed the Federal Procurement Database System (FPDS); the US Overseas Contingency Operation (OCO) request reports; the Special Inspector General for Afghanistan Reconstruction (SIGAR) reports; the Government Accountability Office (GAO) reports; the ASFF purchases document and the DoD Inspector General (IG) report). They revealed deep concerns relating to the reflection of that spent on the procurement of small arms to Afghanistan.