This report is part of AOAV’s investigation into the DoD’s small arms expenditure during the War on Terror. The investigation also includes specific reports examining the expenditure for small arms procured for Afghanistan –which can be read here. The research found many discrepancies between the contracts found on the DoD and those found on the FPDS – a report on this can be seen here. For information on what a small arm is see here, and to understand more about DoD contracts see here.

In late 2015 and early 2016, Action on Armed Violence spent months looking at the US Department of Defence’s expenditure on small arms, ammunition and attachments. Our focus was on 14 years worth of contracts issued during the ‘War on Terror’. In so doing, we found that over $40 billion worth of contracts had been issued during this time for such weaponry. One key element of our research was into weapons bought by the US government and given to the military forces of Iraq. 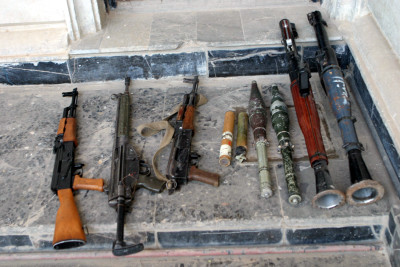 Frustrated by the lack of transparency offered by US DoD published contracts, AOAV looked at a number of different sources in order to identify which small arms the US Government has been supplying the Iraqi government, and the money spent.

AOAV found that contracts totalling potentially $7.5 billion in small arms, ammunition and attachments have been issued to the Iraqi governments by the US between 9/11/01 and 9/10/15.

US Department of Defence Contracts
Our analysis showed that the DoD reported it issued contracts worth a potential $97,330,069 on small arms, attachments and ammunition to Iraq, of this $37,168,117 was on small arms alone.  None of these listed AK-47 sales.

As noted above, according to the DoD, the US government are said to have provided up to $37,168,117 in small arms to Iraq. However, AOAV’s analysis found that the FPDS revealed that far more was reported as obligated – about $187 million. This was spent on small arms, ammunition and attachments for Iraq – with a total of $135,153,163.73 of this on small arms alone. As we continued our research we found that even this FPDS figure may not reveal the whole picture.

Centre for Strategic and International Studies Report (CSIS)
According to a CSIS report, between 2003 and 2013, US Congress was informed of possible military sales to and requests from Iraq totalling some $7.5 billion in six separate requests that included small arms.

Only some of these requests could be found on the DoD database.

AOAV found with absolute certainty that $656 million worth of small arms was requested within these sales. A significant proportion of the remaining $6.9 billion might also account for small arms, but we cannot say with certainty the exact figure. There remains a significant continued lack of transparency which DoD contracts do not clarify. 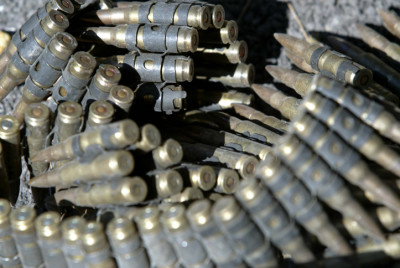 Overseas Contingency Operation (OCO) Reports
On top of this, we can also add figures given by the OCO Force Fund, which details arms provision to the ISFF, or Iraq Security Forces Fund. These show a further 106,986 small arms, including 5000 AK-47s, 53,282 machine guns and 43,200 assault rifles (not including AK-47s).

Section 655 Report
The Section 655 Report detail both the Foreign Military Sales and Direct Commercial Sales from the US Government and private US corporations to Iraq. Taking into account just foreign military sales, this report adds a further 35,714 small arms going to Iraq, at a total cost of $28,409,000.

Cause for Concern
Interestingly, the 2007 GAO reports that the US government lost track of 110,000 AK-47s between 2004 and 2005. None of the DoD or FPDS contracts that AOAV found listed the provision of AK-47s to anywhere near enough of a level to then have allowed 110,000 to have been lost track of. A further 80,000 pistols were also determined to have been lost in the report.

US government reports also display a widespread concern that the huge numbers of small arms being sent to Iraq is leading to a surplus of weapons, opening up the possibility that these weapons may fall into the wrong hands.

A 2006 SIGIR report found that just 2.7% of IRRF-funded weapons were registered in the DoD Small Arms Serialisation Program. A later 2015 SIGIR report indicates that there was a lack of end use monitoring, especially with regards to assurance that the Government of Iraq was complying with requirements with regards to use and transfer of defence items. More detail on these reports and accountability issues can be found here.

When it comes to identifying weapons destined for Iraq, paid for by US taxpayer’s money, the lack of transparency is pervasive. AOAV’s analysis would suggest that even though the totals we have found are significantly higher than the DoD, they still may not reach the true figure.

Overall, AOAV has found that 949,582 small arms have been supplied to Iraq, at a total cost of $1,124,829,163; thats nearly a million guns, and over a billion dollars spent. Including the ammunition and attachment costs shown in the FPDS, this brings the total small arm expenditure in Iraq to $1,176,671,415.

After submitting to the DoD our findings in March 2016, AOAV provided the DoD the opportunity to submit a list of the small arms they believe have been supplied to Iraq and Afghanistan.

In August 2016, the DoD provided AOAV with a table of data summarising the small arms provided between CY 2004 for Afghanistan and CY 2005 for Iraq until June 2016.

The findings for Iraq show a discrepancy of over 740,000 small arms. The DoD figures accounted for just 22%, of the small arms AOAV found to have been supplied by the US in this period. Particularly concerning was the fact that the DoD did not specifically account for any of the 190,000 AK-47s AOAV had recorded, and at best the charts may be able to account for 12% of these. Furthermore, the data does not account for the 170,000 pistols that we know have been sent to Iraq.